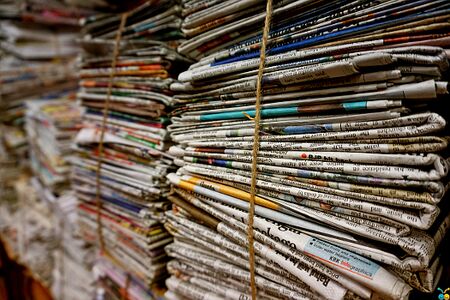 Having all these newspapers around is not only a fire hazard, but will attract the attention of Marie Kondo, who will continually nag you to throw them out.

Zeitgeist (German: zeitungs: news, + geist: a supernatural being that is the focus of every Scooby Doo cartoon in existence) is a paranormal phenomenon.

It is caused by not throwing out old printed materials when they become useless. Eventually, the continued presence of a newspaper (remember those things?) will imprint itself upon the ether. This disturbance of the natural order of things is thought to be caused by conflicting news within, like "Millions starve in country you've never heard of" vs. "Happy pet boa constrictor reunited with Florida family".

Then an old paper will reappear again and again in any pile of papers that are present on a table, chair or stuffed into your pants. At this point, any attempts to throw it out will be futile. Before you know it, ghost squirrels and rats will be attracted by magicked newspapers, and you will have to hear them tromping around in the attic 24/7.

This also applies to the junk mail piling up on your front doorstep. Ignoring the pile building up there by always leaving by the back door will cause the same thing to happen. While burning paper bags of poo left at your front door by pranksters will clear the junk mail for a time, eventually it, too, will return, threatening to collapse the front of your house.

The only solution is to find an exorcist that also specializes in hauntings by origami animals. In fact, if you take a look in the ever-returning newspaper in its classified section, you can probably find one listed. Explain your situation and one house call later, they will not only lift the curse but will also bring along a mini-Bobcat and dumpster to clear out the old newspapers. Of course, since we've already established that you're a slob, you'd better keep their number on speed dial.