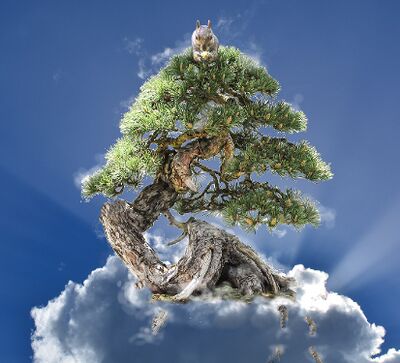 Yggdrasil is the World Tree or Tree of Life in Nordic/Germanic mythology, as if you couldn't already tell with the double "g"s.

It has been growing since before time began with its roots reaching through all domains and dimensions, making Star Trek and starships totally unneccessary, really. But this would have made starship captains into termites or maybe squirrels, which would have been a controversial move and likely would have made Gene Roddenberry a laughingstock.

The first humans, Ask (later Ask Jeeves and changed back) and Embla were created from the World Tree. As both got nosebleeds from being high up in the tree, plus having to deal with increasing rent, they left Yggdrasil and moved to Earth, though not before having their luggage lost by the gnomes plotting your death.

As there are no exterminators in Nordic/Germanic mythology, Yggdrasil is under constant threat. A dragon gnaws on the tree's roots while four deer known as Dain, Dvalin, Duneyr, and Duratro, or the Four Stooges, eat its leaves. A rambunctious Pippi Longstocking is always breaking off branches. Meanwhile bartender Heidrun the Goat serves mead to the tree while still another deer named Eiktyrner (no relation to Ike Turner) pours water from its antlers to nourish the tree. The Squirrel of Life, Ikea, along with his gang of squirrels, also protect the tree by dropping nuts on the Four Stooges and distracting them. However, they do it more for fun than anything else. The latter have tried calling Thor to deal with the threats, but Thor is just one of those guys who always has a full inbox so they can never get hold of him.

As if Yggdrasil weren't crowded enough, it has three ladies running a dry cleaning shop with a loom in the back, where they weave time itself, usually with appropriate designs like the Back to the Future Delorean. They are Urd (representing the past), Verdandi (present), and Skuld (future). So when they tell you your cleaning will be ready by Thursday, it WILL be ready by Thursday.

So when a Scandinavian tells you that you are out of your tree, you should probably thank him or her since it can have all kinds of meanings. Then again, it still might be just something to confuse and distract you while they steal your bicycle.