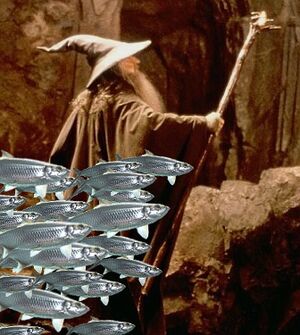 Wotan/Odin commanding herring to sacrifice themselves at a Smörgåsbord.

Wotan (Germanic) or Odin (Nordic) or Rootie Kazootie (Brooklyn) is a powerful god in Norse-Germanic-Brooklynese mythology.

He is responsible for wisdom, life and death, war, magic, knowledge, poetry, etc., etc. His many powers also surprisingly includes control over carnival rides and carnival foods, and so he is also the god of projectile vomiting. So don't mess with this guy if you know what's good for you.

Wotan/Odin created two of the first humans, Ask and Embla. The latter two were the long-suffering neighbors of the zany Adam and Eve, in a relationship much like the Flanders family to the Simpsons. So much for passing on wisdom and knowledge. Humans did get the war and death parts down pretty well, though.

With a desire to become the absolute master of Trivial Pursuit, Wotan traveled the Earth riding his horse Sleipnir and accompanied by two nerdy wolf librarians in order to find out what was going on. In addition, he had two ravens reporting everything that they had seen on a regular basis. Some say this represents the thirst for knowledge. Others say it represent obnoxious nerdy nosiness. Today, Wotan/Odin uses the American NSA and CIA and the Russian FSB spy agencies plus Al Jazeera news to keep on top of things when not watching cartoons or drinking mead.