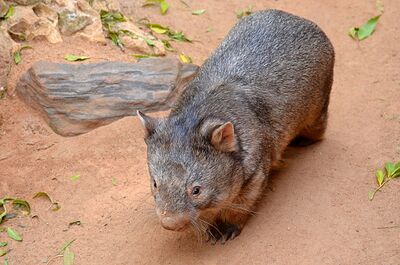 An ironic wombat being ironic by not doing anything remotely surrealistic.

In Aboriginal beliefs, wombats are lowly regarded. This is thought to be because those peoples believe in nature and embrace it fully. They dislike that wombats embrace technology and have defaced Aboriginal rock art by redrawing humans and animals as riding in carnival bumper cars and dancing with toasters.

Wombats often do performance art, assembling into complicated massed formations that can only be seen in satellite photos. Accused of being sellouts for forming a giant Qantas koala, it turns out they were actually making an ironic statement about vegemite that nobody could understand. By sheer force of will, they have been at times been able to make the Sun rise in the North as a green cube, still quite unnerving to most Australians.

Wombats all have their pouches facing backwards. Biologists contend this is an adaptation to keep dirt out this is when digging burrows, but wombats contend this is just done for style and that it allows wombat babies to look backwards, physically and historically. The critters' ultimate surrealist nature comes out in the form of their droppings (Australian: shit). All wombats shit in little cubes. The scientists that contend this allows for stacking dung into little piles to mark territory have since been rounded up and sent to Chinese prisons. This ability was said to have driven Salvador Dalí mad in trying to do the same himself, causing him to become a commercial sellout in later life.