The truth about whales.

A whale is defined by the International Society of Science as "any organism weighing over 500 kilograms." This definition has been much disputed, resulting in the European Society of Animalology separately redefining a whale as "any mammal weighing over 500 kilograms." To justify this claim, they stated that "a whale [was]... not a fish." However, any sensible person knows that whales are, indeed, fish, and so this claim has been rejected by the scientific community as a whole. Whales are also classified as sharks by many modern Animalologists.

Whales have been classified by the United Nations as nuclear weapons and, as such, the proliferation of whales is forbidden by international law. 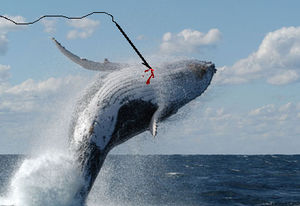 The best way to save the whales.

Whales have been drowning themselves for thousands of years. Obviously, this has put their species in decline. It has been concluded that whales can only be saved by placing large, sharp objects in them and towing them ashore, where they will not drown. The reason is unknown why they are extremely dumb.