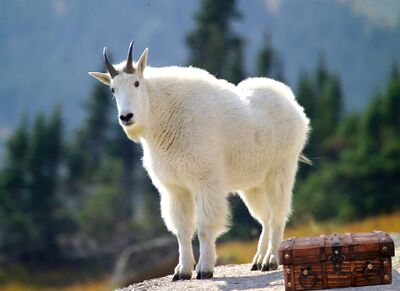 Not Forrest Fenn, not the finder, and not the treasure. But you get the idea.

Denver, Colorado – The legendary treasure hidden by Forrest Fenn has finally been found after a ten-year search by thousands of people. With only a poem containing clues and the location given as "somewhere in the Rocky Mountains" it proved a challenge to many. So it should be no surprise that the treasure, reportedly now worth up to $2 million, should be found by a native.

Asking to be identified as "Rocky" while keeping his real name a secret until Redditors doxx him, the lucky finder noted that, "I wasn't really one of the serious treasure hunters and it was just dumb luck that made me stumble across it. It was in a place I don't normally travel and was only partly hidden."

When asked what he would do with the treasure, Rocky replied, "I wasn't really interested in what was inside the box. All kinds of shiny stuff, it was. So I just threw those out. Then I ate the box. It was delicious!" This attitude might have something to do with Rocky being a mountain goat.

So now those deluded types who spend their free time searching for treasure can now turn their thoughts to other things, like the briefcase full of money from the movie Fargo or the gold dust stolen from Fred Dobbs in The Treasure of Sierra Madre. And you people looking for Fenn's treasure in Africa and the Himalaya Mountains can stop looking now.