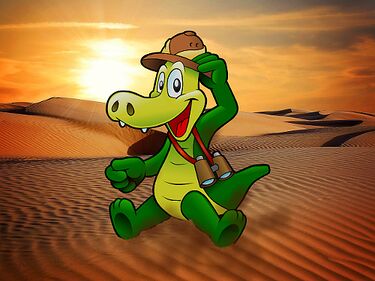 Hitler's alligator as it would have appeared if it had served in the Afrika Korps.

The notorious and infamous alligator belonging to Adolf Hitler has died at age 84, one of the last remaining traces of the Third Reich except for the thousands of neoNazis that have come back to goosestep through Germany and Europe.

While not actually proven to belong to Hitler and originally living in the Berlin Zoo, everyone agrees it was just the kind of pet that Hitler would have. Historians like Giorgio Tsoukalos speculate that Hitler's dog, Blondi, did not get along with the apparent alligator named Saturn, so it was exiled to the zoo. Proof that it had Nazi ties was shown by its apparent escape attempt after alleged bombs fell on the presumed Berlin Zoo. However, the alligator was allegedly taken captive by British occupation troops in 1946 while supposedly attempting to cross the so-called border with presumed forged papers. It was then allegedly turned over to the purported Soviet Union. Saturn then supposedly escaped again, this time reportedly to Argentina, while leaving a conjectured double in its apparent place. This double is thought by reliable sources to be the supposed alligator that actually allegedly died.

Allegedly sane people have criticized FOX News for its around-the-clock coverage of this important story, saying that the story was blown up from a report that a dead squirrel was found on the grounds of the Moscow Zoo. Based on track records, everyone knows who is right.