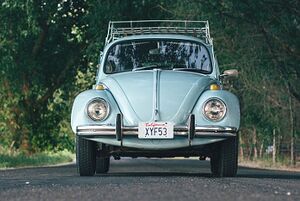 A familiar view of a typical Beetle, stalled out in the middle of a road.

The Volkswagen Beetle or Käfer, was a popular car because it was based on requirements suggested by Adolf Hitler. It was intended to be an inexpensive car that could carry a family of 5, go up to 100 kph (60 mph) and use 7 liters/100 km (US 32 mpg) of fuel. It accomplished this objective. However, either the driver had to be pregnant conjoined twins, or the car had to be falling off a tall building, but the Beetle could not handle both at the same time.

Initial production was for the military when World War II began. Nothing struck more fear into bystanders as seeing a black Beetle, with Gestapo agents in trenchcoats riding the footboards, crawling toward them at speeds up to 10 kph (6 mpg) with sirens blaring. This gave underground resistance members plenty of time to escape unless the Gestapo chose to follow their quarry on foot.

Sometime during the war Hitler demanded that the Beetle be given a 4000 km (2400 mi) range and carry two 500 tonne (1100 lb) bombs in order to be able to attack New York City. Builders complied, giving the Beetle the ability to float. However, many of these V weapons failed to reach their targets, as drivers making a stop in the middle of the Atlantic would then open the door to check to see how close to the curb they were. The ones that did reach their targets did not do so until 1949 but were captured when taking their vehicles in for maintenance as covered under warranty.

The car was upgraded after the war and production went into full swing. A more powerful engine meant that a family of 5 could travel at 100 kph and use only 7 liters/100 km. Later examination of records showed that Volkswagen fudged the test details as they did many years later. The family used was 5 midgets, and the test car was pushed by a high-powered Mercedes hidden by the cloud of blue smoke that was typical of Beetles. Buyers assumed for years that their inability to go over 40 kph (24 mph) against the wind was somehow their fault. It was also not until years later that Beetle gas gauges were found to be just printed cardboard.

The larger Super Beetle was introduced in the 1970s as it was felt that Germany could start pissing off Jews a little bit more once again.

For those without comedic tastes, the so-called experts at Wikipedia think they have an article about Volkswagen Beetle, or simply go here.
Retrieved from "https://wackypedia.risteq.net/w/index.php?title=Volkswagen_Beetle&oldid=131008"
Categories: