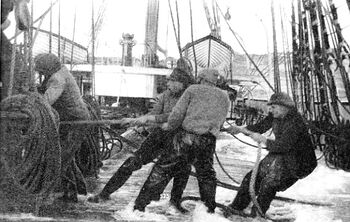 Rather than pulling sausage through the grinder, these workers are preventing the vacuum packaging used in cans from sucking in too many sausages.

Vienna sausages are small sausages packed in a can.

As shown in the movie The Deer Hunter, Vienna sausages are often used instead of pistols in a game of Russian roulette. After the can is opened, players take turns trying to remove the tiny sausages one by one from the can. The first one to cut himself on the can will die by bleeding out in great pain as the liquid in the can contains salt and leech leavings. A dying player can still win the game by severing his finger and leaving it in the can. At that point, his opponent will be so grossed out as to leave the table and go home and sulk, losing the game. This is why Vienna sausages are packed in tomato sauce, to disguise the bloody nature of the game. However, the tomato sauce interferes with adding the huge amounts of ketchup needed to down the product.

There are no recipes for Vienna sausages. In episodes of Iron Chef and Chopped, all contestants failed to make any dish using Vienna sausages. There is the popular option to boil, bake and then fry them. The sausages are then dried for two weeks in the sun. These are left out for crows. The crows will then all move far away.

The "Vienna" part of the name is of course referring to its origins in the city of Vienna, the same as wieners since "Wien" is the word for Vienna. The sausages were long and thin at one time, but at some point were cut into stubs to fit into cans. Cans, of course, are also named for their place of origin, Canada.