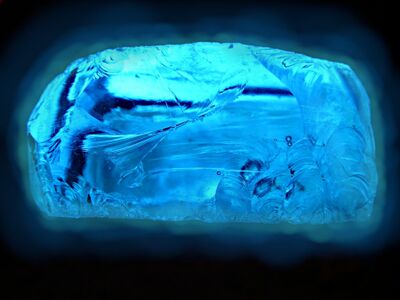 Vibranium ore, just before being made into Wakandan pizza topping at T'Chuckie T'Cheese's.

“The most versatile substance on the planet and they used it to make a frisbee.”

Vibranium is the strongest metal known in the universe. Until the next one comes along.

The only source of it on Earth is from a meteorite that smacked into Africa eons ago. This was done as a prank by drunk time-traveling Giant Space Raccoons of the 8th Dimension. Their plan was to draw a gigantic goatse in the resulting crater, but the critters had all fallen asleep afterward and were too hung over the next day to do the job. They did manage to wipe out all the dinosaurs, though.

Today, it is the basic material for everything hi-tech in the once-secret and invisible African country of Wakanda. It makes an excellent fertilizer. It enhances the flavor of soups and salads. It can heal the sick and raise the dead. While appearing to be the perfect material, it does have limitations that supervillains can easily figure out when the plot calls for it. Still, it is a requirement for weapons and armor in superhero suits plus underwear and artificial arms to be used by humans that can still easily have the rest of themselves asploded. So expect to see a lot blue glowing everything in the near future. Bring along some good quality shades for the next MCU movie, okay?