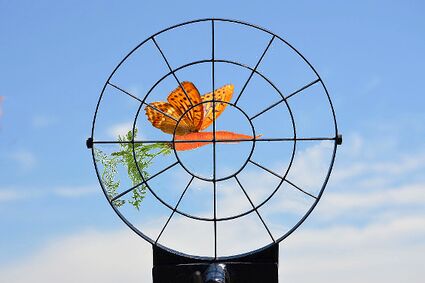 Just because you're a vegan doesn't mean you have to sit at home getting a delivery of vegetables or tending a tiny backyard garden. A world of adventure awaits you! And even if you have gone totally organic as well, you will find wild fruits, nuts and vegetables much better tasting than anything that you have ever experienced. Plus you'll be getting lots of exercise in fresh air by tromping around in the woods.

You shouldn't just go out into the wilderness and chomp down on the first interesting thing you see. You not only have to be able to recognize the wily and elusive wild produce that is out there but you need to avoid the poisonous ones. Therefore, you need someone to take along with you, preferably a little kid named Mikey or Mikie. Mikey should be an orphan or your obnoxious little younger sibling since he or she will be your taster and will not be missed much if he or she doesn't come back from the outing into the woods. Keep a photo record of what little Mikey tries out to tell the difference between good stuff and the deadly ones. Take particular note of any psychotropic mushrooms you may find, since you can trade any extras with your fellow vegans for other goodies.

Having Mikey along serves other purposes when you out foraging in the forest. Stumbling across a secret pot farm is always possible, so always let Mikey roam ahead of you to trip any booby traps and be the first target of anyone guarding the farm. Further, you may run into wild animals like bears who will recognize that you are competing for their food out there. So make sure Mikey always has his or her shoelaces untied, which means Mikey will be first to trip and fall if you are being chased by an enraged bear. In this vein, it can be a good idea to arrange an outing for a several Mikeys from an orphanage as insurance and to maximize your foraging ability. So long as you come back with at least one kid, the orphanage won't care.

Supposing you weren't stupid and went out in the dead of winter with nothing to be found, you should return with a decent haul of fresh and tasty wild items. If you forgot your way to the places where you found them, there's no need to worry. Being little kids, Mikey or the group of Mikeys will have plowed a trail of utter destruction through the woods so you will know not to return to those places for the next 50 years or so.