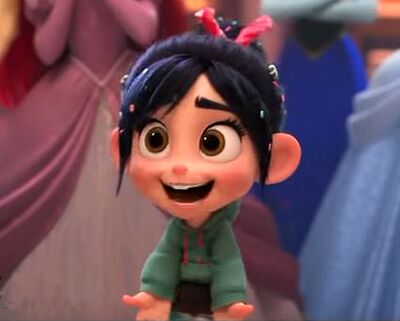 Vanellope von Schweetz, on receiving word that she would be sponsored by ISIS. However, the offer was later withdrawn when she refused to wear a burka.

With Danica Patrick setting the example, women, and apparently in this case, little girls, got into auto racing at the highest levels. Starting out in the open wheel Candy Crush class, von Schweetz lacked sponsorship but soon became a competitor to be reckoned with, known for her aggressive driving and snarky attitude.

After failing on the NASCAR training circuit because she could not see over the dashboard, von Schweetz moved to the Grand-Am Sports Car Series while practicing against street racers. This seemed to play more to her strength, bat fuck insane reckless driving. Despite her still-aggressive nature, von Schweetz never had to pit in a race to change tires or take on fuel, giving her a huge advantage. Some competitors complained it was her small size that allowed her to do this. However, Kyle Petty and Dale Earnhardt Jr. only weigh 20 and 24 lbs (9 and 11 kg) respectively, so that argument went out the window.

Von Schweetz later briefly returned to NASCAR aided by approved fireproof telephone books on which she could sit. However, she was apparently resented by the Good Ol' Boys on the circuit who often intentionally crashed into her car. After all, it's their sponsors' money and not their own when it comes to repairs. She was frequently fined by NASCAR for being crashed into because NASCAR is NASCAR. Her most controversial race was when two albino gentlemen with swords were spotted in her car, then reappeared in other cars, causing them to crash. Her suspension for this was lifted when a retired racer, Morpheus, defended her in a hearing by scaring the crap out of the assembled board.

She is now reported to be a successful competitor on the underground Slaughter street racing circuit. She also has been seen in the worldwide GTA series which should fit her to a T, since she prefers to drive stolen cars.

For the religious among us who choose to believe lies, the so-called experts at Wikipedia have an article about a crazy little girl that drives like a maniac and thus probably drives for Uber, or simply go here.
Retrieved from "https://wackypedia.risteq.net/w/index.php?title=Vanellope_von_Schweetz&oldid=138664"
Categories: