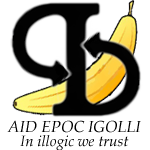 The Small, piece of paper left at the crim scene.

On March 12, 1997 a man was murdered. The police had no ideer who did it. All they had for evidence was a small piece of blue paper with some type of logo on it. Forensic scientists researched the logo all over th internet and found......DUN DUN DUN! The logo belonged to a site known as Illogicopedia. Who could ove done it? Vote Now! You can add more names to the list..I just thought of all the users I could. To plead your innocence, go to the talk page and plead there.