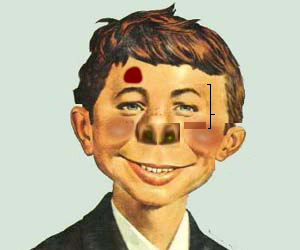 Oh, hi guys, I'm here to talk about mucus, and colds, and other afternoon passions we Westerners enjoy. One moment,

Uh. I don't feel too good. I think it might be infectious.

Anyway, mucus's origin lies in the drips that were found on a Q-tip at a murder scene. The murderer said...

I'm all stuffed up. Ohhhh... my dose. My dose is all clnogged. Lemme try one nostril at a time.

Ohhh, I have that thing where one nostril is wet and one is dry. I'll try and clear the blockage.

I think that was cartilage. Uhhh, now there's mucus all over my shirt.

I'm going to make a nice cup of tea.

The spilled tea is burning me. Oh well. Mucus's manufacturing process took a little time to be perfected, starting from tears as a base material. The precise chemical composition was.... Ugh, I hate being sick. It makes me such an evasive narrator. Lemme blow my dose on my shirt.

I bought one of bese bo clear up my stuffed up bose. It bakes all my b's into b's.

So anyway, mucus was soon picked up by a bicycle concern, the same one that built the first powered aeroplane, The Kitty Hawk, in 1910. The bottling rights, branding, and business practices belonged to a competitor called Snidely Whiplash's.... Ugh, I hate phlegm.... I think I'm going to sneeze.

Oh, sorry. I hope I didn't get incredible amounts of mucus on you. All right, back to the history. Mucus gained popularity as an engine lubricant in San Antonio, TX. Mucus was sweeping the nation. Sales reached an all-time high in 1929 before plunging on Black Tuesday. Suddenly nobody could afford to be grossed out anymore. The economic effects....

As I was saying, the economic effects....

Can somebody get me a kleenex?