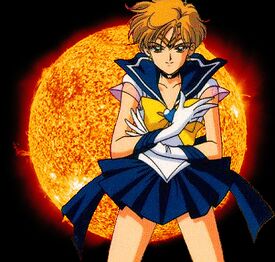 Yes, Virginia, there is a Sailor Moon character named Sailor Uranus. Now they didn't just explain away this character as Sailor Fill-in-the-Name-of-One-of-Jupiter's-Moons. They could have. They should have. Any jokes about this character may come fast and furious, yet they will always be too easy. Can you say Captain Obvious? Unless the joke's on us courtesy of the Japanese Pedo Bear or something.

So what are you supposed to do when your little girl asks for a Sailor Uranus for Christmas? What will you do when you see your neighbor, female or male, cosplaying as Sailor Uranus. AND YOU NOW KNOW EXACTLY WHO THAT IS AND WHAT SHE LOOKS LIKE. Huh, gotta stop shouting. Sorry. Deep breaths, deep breaths.

And Sailor Uranus is apparently in love with Sailor [[Neptune (planet)|Neptune. So that just kills any funny slash fanfic about two of the sailors, because IT'S ALREADY HAPPENING. And no, you're not going to get me to go to 4chan or Reddit, just so I'll have to try to unsee what I might find. I have to go lie down now. Does Godzilla know about this?

For those without comedic tastes, the so-called experts at Wikipedia have an article about Sailor Uranus, or simply go here.
Retrieved from "https://wackypedia.risteq.net/w/index.php?title=Uranus&oldid=145188"
Categories: