Unrestricted submarine warfare is the game anyone can play. 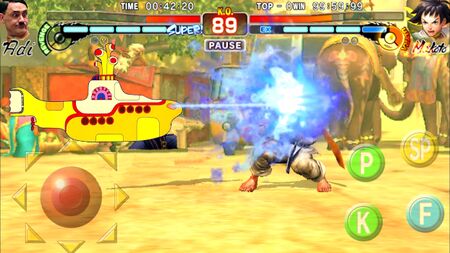 It was invented by Germany in World War I to pass the time on rainy days, then regained great popularity in World War II. The goal of the German player is to starve England. The British player is expected to keep a stiff upper lip over a frowny lower lip, seeing if they can survive on half a potato a day plus whatever can be found by cannibalism.

In the most famous long-form game called World War II, Germany worked to send their nemesis to the brink of starvation by sinking ships carrying food and supplies attempting to reach British ports. They used submarines that they called U-Boats to make them distinct from Bono's U2 Boats. At that point, British people were shocked to find so much food like bananas and pineapples were imported. German submarines were very efficient, also sinking any fish bigger than sardines.

Brits attempted to cheat by getting shiploads of eats from the Americas. But those ships either failed to use invisibility spells or had "SINK ME" signs stuck on their backs and were torpedoed also. Brits then cheated again by intercepting coded radio reports to and from German U-Boats. Shame, shame! Germany was dumbfounded, knowing their codes were unbreakable. Then the US and the UK invaded Iceland despite stiff resistance from polar bears, so that they could have airplanes looking out for U-Boats out in the Atlantic. Germany had so many submarines sunk due to a bad run of dice rolls that they took their toys and went home. American was then able to unload all the Spam it had got sick of on the British public. Unfortunately, the latter were too weak to declare war on the United States.

Today, mostly different players play a modified version of the game with submarines equipped with nukes. Since everyone gets to use their own favorite dice, some player will decide to make a bold move sooner or later. Kiss your ass goodbye.