The United Kingdom is a place with a population full of cool accents. Unfortunately, due to overusage of British accents by idiots who aren't British, the British are slowly losing grasp of their accents and slipping into insanity, which is why Harry Potter exists.

Can be found in the British supermarkets and bowling alleys. In England, the latter is known as a Bouling alley by blooming eejits.

“Yesh mayte innit mayte. Shave your head mayte you'll lose all your friends with long hair. You're a gay mosher INNIT. I'm going to bang you out... nobody move I've dropped my brain.”

The British are well known for their fancy accents. Why? Because they're fancy. But not French fancies. That's all.

The British are also well knouwn four putting unnecessary "u"s after every "o". Four the unitiated, this can be very annouying and cause head jams moure severe than thouse found on the East Lancs road on a Friday afternooun. Fnourdle.

Contrary to popular belief, Harry Potter is not a real person. Nor will he fly to your house on his Firebolt and sweep you away. Nor will Hogwarts send you your letter. Bloody Muggles. You're Muggles, you can't get a letter.

Boom boom. OH NO, QUICK RUN FROM THE TRAIN STATION!

Cough. In conclusion, nothing in Harry Potter is real. 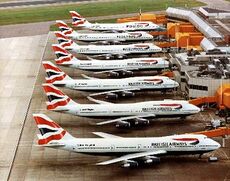 You can get around Britain on oversized sardines made of metal. Freakin' awesome.

It is well known that Brits have an increased beverage consumption threshold. However, untrue is the belief that the British like to eat pants - in fact, they like to eat underwear, not pants. In addition, the following table outlines a number of similar misconceptions.