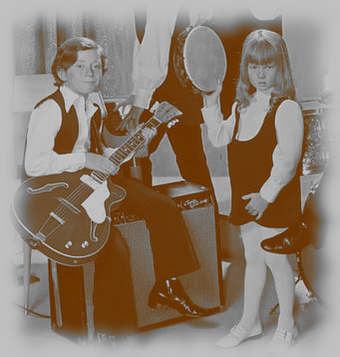 Rare photo of Washington (at left), just before getting his guitar stolen.

Unibrow Grapefruit Washington was a Mississippi Delta bluesman. You couldn't tell by the name?

Obscure to the nth degree, Washington was not discovered by musicologists until 1963, a time when they had nothing better to do. It was not until 2011 that it was found that Unibrow Grapefruit Washington was not his real name, and that he was not an African-American, but Caucasian.

Born Wellington Marchville Pierpont Collingsworth III, Washington, as he came to be known, grew up in a wealthy suburban family in Scarsdale, New York. After running one of his father's factories at age 7, he reportedly grew tired of beating the employees and ran away from home. With less than a dollar in his pocket and a small monthly stipend, about $10,000 a month in today's money, he went to New York City to seek his fortune. He soon ended up hanging out in bars in the seedier parts of the city where he heard the blues for the first time. He fell in love with the music and wanted to learn how to sing and play it.

He bought several guitars, all of which were stolen until he built his own from cigar boxes and fishing line. He then hired the legendary glockenspiel-playing bluesman Blind Cantaloupe Deadpresident to teach him the three chords needed for the blues. However, his teacher was totally frustrated by his pupil's desire to sing the pop tunes of the day in a peppy style while doing jazz hands, and quit. Collingsworth then decided to move to the Mississippi delta region in order to learn all he could about the blues.

After losing all his money to a train conductor who charged him $4,000 for a one-way ticket that normally would cost $3.70, the young hopeful arrived flat broke. As he was temporarily without funds to hire a teacher, his first task was to go to the legendary crossroads at midnight to do a deal with the Devil to become an expert player. Luckily, he was only fourth in line that night and signed the pact in blood in exchange for his soul. He then disappeared for two years, either to practice or to gain a legendary air of mystery.

Soon he was seen on streetcorners playing for spare change (British: busking). Since he had Gingervitis, his red hair and freckles made passersby assume he was just a "high yellow" black person passing for white, and was totally ignored. He received the nicknames "Unibrow" and "Grapefruit" from other scornful blues guitarists. The young artist then added a dead president's last name, and his new name was complete. His most profitable time was in this early period, but it was also his worst. Because he was a dumpy white kid, Washington decided to wear a mask to be more mysterious and hide the fact he wasn't black. Unfortunately, not being from the Deep South, U.G., as he was nicknamed, decided to choose a white pointy hood with eyeholes, scaring away every African-American in the area. He would be paid by black merchants to go elsewhere, but the bluesman always got the same reception by people on the street.

So Unibrow Grapefruit Washington decided to go into the swamps to play for the alligators and cottonmouth snakes who appreciated his blues stylings. And there the story ends. Only one recording is known from when legendary musicologist John Lomax had his legendary car break down in the legendary swamp outside legendary Waxahachie, Mississippi. Never without his equipment, Lomax recorded Washington then and there. However, only the first few lines can be heard since the chorus and the rest is overwhelmed by frogs chanting "Bud-wei-ser" over and over.