Y'all should know that Uncle Ben (no last name) is what you would call the i-conic figurehead of the rice company with his name. He is a credit to his race, not ever thinking once to rise above his station or messing with white wimmen. He gets lighter with every package re-design. Otherwise, most folks 'round here say he'd have to be strung up by his little blue bowtie and someone'd have to go to the trouble to get someone who knows how to untie one of them things.

The man on the box[edit]

Despite what your momma mighta told you, Uncle Ben is not the feller on the box. "Criminy Jesus!", you might say. But old Uncle is too busy on the farm to be posing for no pictures. Since he is a sharecropper, he still owes hundreds of thousands to the owner of the land he works. Plus, at 99 years young, it's plain hard for him to get to around, what with the shackles and all.

Uncle Ben's rice packages carry an image of an elderly Negro gent dressed in a bow-tie, perhaps meant to be a fancy-schmancy servant for rich white folks. They say, whoever "they" is, is that his image mighta been stole from a Chicago busboy, Frank Brown by name. In point of fact, Negroes been used as company mascots since ole Methuselah was a pup. Rubbing them folks' heads was always good luck or something, so a food box was the next best substitute for that since you didn't want real Negroes in your house. They ("they" again) say that Negroes were also connected to rice growing since nothing warmed the hearts of Southerners as seeing slaves working in the rice fields.

Y'all should know that good Southerners allus called elderly black men "uncle," though they was not blood relatives. Jes' common Christian Southern courtesy is all. Plus you didn't have to learn nobody's name. You'd always give out a hearty "Good morning, Uncle," when passing some ole Negro hanging from a tree whether you knew the feller or not.

For those without comedic tastes, the so-called experts at Wikipedia think they have an article about Uncle Ben, or simply go here.

Uncle Ben was born in an honest-to-god log cabin, which should put to rest any rumors about being connected to Aunt Jemima. Being in Texas, he didn't know he wasn't a slave until he was 8 years old, nor was he allowed to have a last name. Not that it really ever mattered since that loyal Southern state still doesn't allow Negroes to vote or have money.

Now then, he did go to a one-room schoolhouse with the Gold Dust Twins and that Cream of Wheat feller. There he learned his letters and ciphering right good but had his eye on bigger things. He allus wanted to be a sharecropper, a-growing rice in the Gulf Coast region. In the meantime, he became one of the backing singers for that there Temptations singing group. After five hard years of traveling, singing and hand jive, he was paid his $50, and up and bought himself some rice seed. 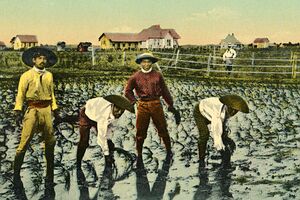 Now look at these Japaheenie idjits a-trying to grow rice. They done flooded the field by mistake!

Ole Uncle Ben only went into the retail end of the rice bidness by accident. A stray ex-perimental V2 rocket went off course from its launch in Alabamer, and done crashed into his fields. It jes' about burned the entire crop ready for harvest and boiled the rest. While ole Uncle Ben was inspecting the damage, who should walk up but that Wernher von Braun Nazi feller, come to check on his rocket parts. During a brief knuckle sandwich fest, the two fell into a pile of now boiled-up rice. Both liked the taste and quick as an armadillo on ice decided to collaborate on this new product. Von Braun arranged to shoot his rockets into ole Uncle Ben's fields on a reg'lar basis during his tests to bring back Nazi glory.

At some point, Ben got himself into a tizzy when heard that someone else was gonna be a-growing rice in Texas. The folks turned out to be a bunch of Japaheenies from Japan, of all places. They was claiming to be able to grow rice that could resist hurricanes and flooding. Everyone jes' laugh, since they knew you just squawked to the US government and they sent you a check when your crop got ruint. Plus like everyone said, what do Japaheenies know 'bout growing rice? His buddy Werner decided to help out and "accidentally" dropped some really radioactive rockets on them. Ole Werner did such a good job, that site is only fit for an oil refinery and a McDonald's nowadays.

That good ole rice is designed to be tasteless, mealy, chalky, with all nutrients removed. That way, it makes anything else that's on the plate with it taste good. Plus it all looks real nice and fluffy on a plate. Let me tell you, it really soaks up the delicious grease when that Paula Dean woman has a big cookout for her Klan friends. Meanwhile, them scientist boys say that converted rice is recommended for your daily dose of pellagra, another fine Southern tradition. But do jes' like us and jes' move it around on the plate and save room for some pie.