From Wackypedia
(Redirected from Tyrannosaurus rex)
Jump to: navigation, search 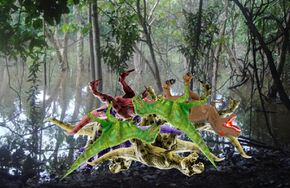 A great deal has been written about the extinction of the dinosaurs, and notably of Tyrannosaurus. Most authors have focused on natural calamities, such as meteor impacts, unexpected hot weather, massive floods, invasions of alien termites, and other such well known hazards. Recent discoveries, however[1], have led to a new conclusion, which is that the immediate cause of the extinction of the Thunder Lizards was bad driving.

This revolutionary theory, which came to Professor Fooblesnit[2] the morning after last year's office Christmas party during his attempts at quelling an intense headache by repeatedly gargling with a mixture of ether and opium[3], promises to turn the entire field of crypto-paleontology on its head.

A theory is of no value unless it can be tested, of course. Professor Fooblesnit points out that experiments in which a Tyrannosaurus was allowed to drive a London double decker bus[4] resulted in an absolute mess, and traffic in downtown London didn't fully unsnarl itself until ... well, actually, it still hasn't finished unsnarling as we go to press, so it's not clear how long it took. (Or will take, rather.)

Though Professor Fooblesnit's discoveries have made the derivation of the term "T. wrecks", which was formerly a bit of a mystery, now seem quite clear, there are, none the less, some alternative possibilities which we should consider. The most obvious derives from the old Georgia Tech fight song, which may have been sung at football games as long ago as the Pleistocene. In support of this ... Well actually it's time to go clean a litter box. We'll have to let the rest of this go for now.