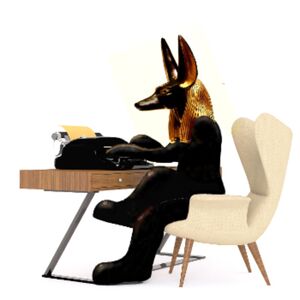 As god of the underworld, Anubis needed his typewriter to keep up with all the paperwork.

“You're my typewriter, I write to you what I am thinking!”

Typewriters are machines invented in Ancient Egypt, just the thing for writing on scrolls. This created a class of rather obnoxious people who could write 65 birds per minute with no mistakes and loved to tell you that whenever you saw them. But all it took was a visit to the temple of Thoth and a small donation, and the typist, as they were called, could be cursed into what Egyptians called a brainfart. This would cause the little arms inside the machine to completely jam up when two keys were hit at the same time. This would require some time to unravel and would often result in ink stains on the typist and the papyrus they were writing.

The typist might clear this up with an offering to Isis, but if any other god heard about their bragging, their wrath would then cause the typist to get a hangnail or even accidentally slam a chariot door on their hands.