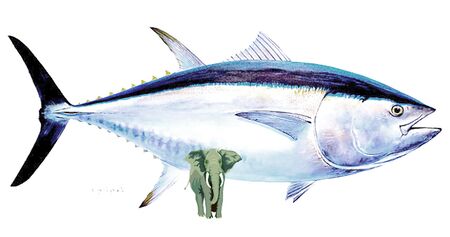 Typical size of a Bluefin tuna before 1950, with elephant shown for scale. The same species today is scientifically described as "eensy-weensy".

Tuna is a fish. It is a fish for eating, unless you're a vegan or a breathairian.

There's nothing better than a good old-fashioned tuna fish sandwich or perhaps even a tuna melt. Everybody likes them. What? You don't? Well then, just find someone who does, which is quite easy. When the person who made the sandwich isn't watching, carefully hold the sandwich under the table. The cat or one of the penguins who live in the walls will be happy to take it off your hands.

Most tuna used to be the size of houses. But that report is from Japanese people who have tiny houses, so we're not quite sure what to make of that. Nowadays, with tuna's general popularity, the big ones are all gone. So, today's sushi chefs have had to develop the talent to line up a dozen or so tuna fish and make them look like a single slice of fish like in the old days.

We are told that wild-caught tuna is a good thing. At least it is a great relief for your pet tuna living in bowl on the mantle. So, make sure your tuna has been caught by someone with a really spiffy nickname like "Sharky" or "Biff". Otherwise, look for tuna that have appeared in somebody's Jackass-type video on YouTube or one of the Girls Gone Wild videos.

On the other hand, we are told to be careful with the mercury in tuna. Personally, I've opened hundreds of cans and never found a car or the planet inside, so I don't think it's a major problem.