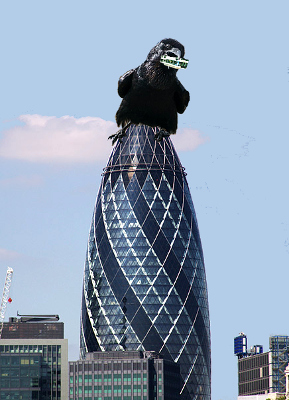 One can just make out one of the legendary ravens high atop the Tower of London.

The Tower of London is the highly notorious maximum security prison located in the United Kingdom. It is part of the European prison system, housing the worst of the criminal world right in the middle of the most crime-filled areas in the world. The largest gang confined there is the international cartel calling itself Swiss Re.

The original tower was built by Will.i.am the Conqueror just after 1066 when his good friend Norman conquered England. Norman then turned the country over to Will.i.am. The monarch would then sit at the top of the tower and glare menacingly at his conquered subjects. This gave him the double benefit of getting his frustrations out, as well as letting him avoid the odours and pestilence of living at ground level.

With most castles yet to be built over the defensive piles of sticks favoured by the English natives, the first tower proved to be the ideal place to lock up prisoners from the very start. Will.i.am would have signs hung advertising a bed and breakfast for wealthy travelers. Once in, he would hold them for ransom to build up his treasury. Quite soon, Will.i.am was able to pop down to Harrod's and purchase what are known today as the Crown Jewels. Kept in the tower for years, the Crown Jewels are now housed in Prince Charles's trousers.

As time passed, the tower was buit up into a right proper castle with a moat and high walls. Unfortunately, the kings of the time were never satisfied with one thing or another with the walls and they kept building one wall after another. Thus, it was made quite difficult to bring prisoners into the Tower, often taking days whilst tall ladders were found to scale each wall.

It was not until the time of Henry VIII that a single superwall was planned. However, every time a load of bricks was delivered, it quickly disappeared. New buildings started appearing around the Tower and its owners were suspected but never brought to trial. The superwall project was ended abruptly for lack of funds. Henry VIII then turned his attentions to beating up on and tearing down the monasteries of the time. Eventually, the other castle walls were taken down brick by brick in the dead of night and were gone by about 1450.

When Richard 'Three Eyes' came to the throne, he had the idea to convert the Tower into a youth hostel and day care center. The first attendees were two princes named Edward and Richard. They somehow disappeared, never to be found. Richard III was accused of murdering them to solidify his claim to the throne. However, because of the constant additions to the Tower it may be they just wandered off into disused areas. In fact, children's bones were found beginning in 1934 in various parts of the Tower. Now numbering seventeen skeletons, none have been positively identified as the two princes. It does point to the popularity of the day care center but also its poor oversight procedures.

By the 20th century, The Tower was made into a tourist attraction where visitors could feed the inmates peanuts and take pictures with them in their cells. However, this was stopped when an American tourist was severely bitten when he tried to feed one of the Kray twins a stale Jaffa cake.

The old Tower was eventually accidentally demolished by the head of spy service MI6, Dame Judith Dench, when she was fooled by Javier Bardem by the old "press this button" trick. The explosion was then blamed on the IRA as the country no longer had hippies on which to pin the blame. 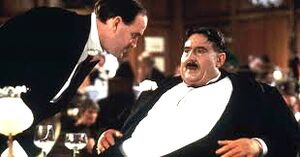 The notorious legendary Kray brothers in the prison cafeteria.

Security remains paramount in the glassed-in version of the tower, completed in 2004. No escapes by rope or bedsheets tied together are possible from the sealed windows except when the windows fall out by themselves. Any helicopters attempting to free prisoners are foiled by the ravens. Prisoners state they are continually frightened by seeing jets flying below the level of windows of their cells on the flight path to Heathrow airport. While just walking out the front doors seems easy, there is still the problem of getting away from the Tower. Uber drivers taking calls from prisoners will just report that callers never showed and pocket the £5 penalty fee.

Prisoners are only allowed their meals in the confines of the dizzying but secure heights of the prison cafeteria located at the top of the tower. Prisoners have repeatedly complained and even rioted over the food served there. However, prison officials have drawn the line: foie gras remains only available Wednesday through Friday with no exceptions. And one would think the view alone would be worth a long prison sentence, but prisoners are often in the dark as the top of the tower is often covered by a gigantic raven's gigantic buttocks.

Her Majesty Queen Elizabeth II, as reigning monarch, still holds the keys to the Tower of London. As such, she is required to stop by about midnight and lock up, making sure to jiggle the door handles before departing.

While often busy posing for adverts for the vile rotgut American gin that bears their name, Beefeaters still act as guards for the Tower of London. While visitors expect to see dozens of Beefeaters in traditional red livery, they see almost none. That is because today, high tech Beefeater suits make the wearers invisible and with ninja training, Beefeaters can now hang undetected from ceilings in the Tower.

For those without comedic tastes, the so-called experts at Wikipedia have an article about Tower of London, or simply go here.

It is unknown why ravens were ever at the site except for the hill that the Tower is built upon was always full of juicy worms. And these were previously typical ravens, large but not too. However, with the Windscale nuclear reactor disaster, radioactive gas wafted over the Tower, with generations of ravens eventually growing to massive size. As with the Blitz during World War II, Londoners take giant ravens in stride and hardly seem to mind that the ravens like to eat tourist buses.