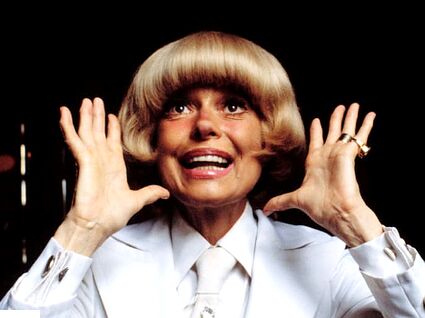 Carol Channing... or is it?

Ulysses woke up with a splitting headache.

He had been part of a supervised tour group visiting North Korea, hiking up Paektu Mountain to take in the view. However, they encountered stormy weather and the last thing Ulysses saw was a hailstone the size of a basketball headed for his skull. Now, there he was in a forest, without his camera, passport or the souvenir Kim Il-sung™ brand candy bar he had been given earlier in the day. So, he never got to taste its chocolatey sawdust goodness.

He remembered back to his cub scout leader telling him to follow water in order to eventually reach a settlement. Ulysses found a pond and circled it several times to no avail. He then heard voices in the distance. Saved! someone was nearby! He headed toward the sounds.

The voice turned out to be coming from a radio in a tank. Ulysses realized he could now understand Korean for some reason and heard, "You must always be on guard to kill any capitalist aggressors invading the motherland disguised as tourists!." Uh-oh. However, the tank commander replied in a sarcastic tone that there would be no invaders this far north, and anyway, who would check because their generals were all at the Carol Channing concert being held by their Glorious Leader Kim Jong-il? Suddenly, Ulysses heard a gunshot and everything went quiet. He quietly snuck off, looking for another way to get out of North Korea.

Over a meager dinner of berries that would later prove to be hallucinogenic, a plan came together in Ulysses' mind. He would disguise himself as Carol Channing in order to escape the country. He had seen Channing many, many times in her appearances on game shows and afternoon TV and was confident he could pull it off. Or maybe it was the berries. In any case, Ulysses came across a couple of bears who were very happy to help with his plan. Again, maybe it was just the berries.

Ulysses practiced Channing's raspy voice every day. He found deer that had long enough fur so he could dye it to make a blonde wig. Meanwhile, he had found silkworms and used their silk to make approriate clothing. The bears worked a homemade loom to make cloth and were taught how to use found tools like scissors and needles to tailor a stylish suit. Ulysses also raided a house for two traditional horsehair hats that he reworked and dyed to make a matching floppy hat to achieve the proper look.

He then broke into nearby Secret Prison Number 35447 that he discovered while foraging for materials. There, he met with drag queens that taught him makeup and the proper way to walk and act like Carol Channing. At the same time, in exchange for a large supply of the hallucinogenic berries, the prison metal shop agreed to build a cunning replica of an official North Korean governmental limo, partly powered by the bears pedaling but assisted by hamsters in hamster wheels for better acceleration.

Finally, the day came when everything was ready. Ulysses bribed a local army officer (more berries again) to telephone headquarters to order a special jet for Carol Channing arriving at Pyongyang airport to take her anywhere she wanted. The fake limo arrived at the airport with no problems, and "Carol" was saluted as her "limo" was allowed onto the military airfield to board her plane. As the disguised Ulysses and bears were about to board, soldiers appeared out of nowhere and an officer stepped forward to arrest them all. As it turned out, Ulysses' plan was 33 years in the making and by the time it finally came together, Kim Il-sung had died and his son Kim Jong-un was in power. And Kim Jong-un was a Madonna fan and not to be messed with.

Ulysses feared that he would be shot on the spot, but he was transported under heavy guard to Secret Prison 42896. With a bag placed over his head, he was led to a tiny cell and locked in. When he removed the bag, he looked up and down the row of cells and saw nothing but other Carol Channing impersonators: male, female, Korean and non-Korean, most now very old. A tear came to his eye as they all greeted his arrival with the song "Hello, Dolly!"