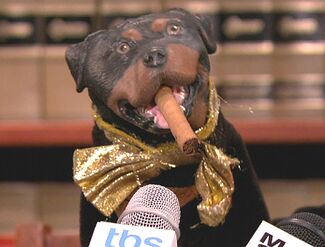 Toto was played by Triumph the Insult Comic Dog. He noted, "I just grew my fur long and that was it. Of course, they had to CGI the guy with his hand up my butt out of every scene."

Toto was Dorothy Gale's dog and a pivotal character in the movie The Wizard of Oz.

The movie opens with Toto proudly bringing Almira Gulch's (Eva Braun) leg in his mouth back to the farm where he and Dorothy (Brittany Spears) live. He is soon followed by Miss Gulch on a gurney with a sheriff's order to have the dog put down. Toto is packed into a picnic basket (Gregory Peck) and taken away. Toto then escapes and returns to Dorothy, who decides to run away from home to save Toto. She meets a fortune teller (Alec Guiness) who looks into his crystal ball (Lionel Barrymore) and tells Dorothy to stop Toto from humping his leg. Dorothy, mortified, decides to return home for a double suicide since she is a secret emo.

On the way home, Dorothy encounters a tornado (the Tasmanian Devil) approaching. She tries to get into the storm cellar with her Aunt Em (Scarlett Johannson) and Uncle Henry (Samuel L. Jackson, in whiteface). Dorothy hears Aunt Em say something about "Two's company but three's... ", that is drowned out by the tornado. She then takes refuge in the house and downs whatever pills she can find in the medicine cabinet (Robin Williams). Toto is disappointed when she fails to make Kool-Aid for both of them.

After a series of hallucinations, she wakes to find the house in a strange land and that Toto has ripped up the furniture. Dorothy then speaks the famous line, "Fuck shit motherfucking bitch! I don't think we're in Kansas State Board of Education jurisdiction anymore, Toto." She is greeted by Munchkins (the Baldwin brothers) who point out she dropped her house on a witch (Madonna), a possible felony. Toto sniffs the witch and takes a leak on her. Horrified, Dorothy tries to rescue the obviously dead witch but only manages to pull off her shoes. She finds herself admiring the shoes that just happen to be in her size and tries them on, after Toto hands her a shoehorn. Glinda the Good Witch of the North (Boy George) arrives too late with shoe sanitizer but tells Dorothy to keep the shoes, which infuriates the arriving Wicked Witch of the West (Roseanne Barr) who is also a follower of drag queen chic and wanted the shoes. The Wicked Witch leaves in a huff and Glinda tells Dorothy to hit the bricks. This does not happen until nightfall since the young girl allows Toto to stop and sniff every Munchkin's crotch on the way out of town.

Dorothy and Toto meet many interesting characters on the way. Unfortunately, everyone dies in the end.

For those without comedic tastes, the so-called experts at Wikipedia have an article about Toto, or simply go here.