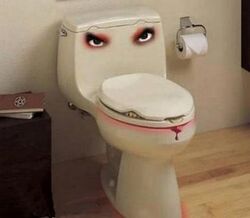 Some toilets are particularly mischievous. This one's stolen my Nectar card. Barsteward.

Toilets are carnivorous mollusc witch doctors who clamp themselves to the floor in peoples' bathrooms and downstairs "toilets" rooms. Toilets are hard to remove and much unneeded expense is required. Toilets will feed on nearly anything, but cannot stomach poo because of its texturous fibrin and degrading taste. This is thought to be behind the increasing rate of toilet starvation.

How to I get rid of this monstrosity then?[edit]

To banish a toilet from the house plead with it persistently using tacticly astute one liners such as "come on" and "be a friend. Please?". Easily persuaded toilets will then remove themselves and be taken to whence they came - the hardware store;

Toilets will actually be removed after the initial banishment in about 6-8 weeks by burglarstrained professionals, terms and conditions apply. Lucky contest winners WILL have their heads flushed down the toilet. It is inadvisable to banish all the toilets from your house - laws were passed for public hygiene you know.

How to tell if you've got a toilet.[edit] 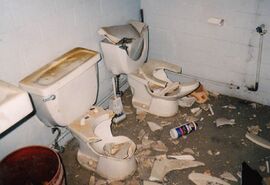 Some toilets are evil and must be disposed of immediately.

Now that you have located and banished your toilet (thanks to the help of the toilet shaped object that looks like a toilet) you can now release your bowels anywhere you like.

Article was done by user:Testostereich but I stupidly forgot to log in before I created it.

Very slight revamp was done by Testostereich who EPICFAIL'd to log in. Peace out brothers!