Nonono! You don't understand! I'm just going through the drive-thru to order, then I'm going to eat on your patio.

The line's are really long inside, so I came through this way. Pretty smart, eh? NO!!! I don't want it to go! I just told you!!! Look, I'll just pick up my order at the window and park and go to the patio, okay? Easier for both of us, then. Jeez.

(pulls up to window)

Okay, I've paid, but where's my order? You sent it to TOGO? WHY??? Because it was marked on the receipt that way? Where's Togo??? No, I'm not going to look it up, and not on Wackypedia. Those fukken guys sold me a fnurdle so I could conquer time and space and I barely got through the Sixth Dimension when it died. Hey!! Don't you close that window and lock it!! Hey!!! 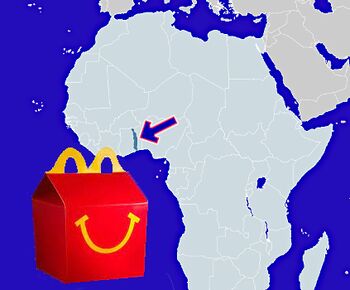 Over 5 million Happy Meals have disappeared in Togo (shown) due to badly interpreted instructions. Countless arrows have gone missing there as well.

Meanwhile, monkeys in Togo had found the Happy Meal and ate it, including the bag. The toy became an object of worship, causing Catholic missionaries to call on the Spanish Inquisition to find and destroy it.