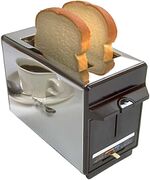 Aw man, I got the toaster mixed up with the picture on the side.

A toaster is a useless item sometimes handed out by various companies such as banks in order to tempt suckers into wasting their time and money by buying useless things such as ANOTHER bank account when obviously they already HAVE ten.

The adjustable dial or slider on a toaster varies a parameter called the "toastivity" (symbol: Greek letter tau) which adjust the darkness of the resulting toast. While not labeled, most dials are actually calibrated on a logarithmic scale, so that the highest setting may be millions or billions of times toastier than the lowest. This little known fact is the casue of much burned toast.

It is a little known fact that toasters are the children of God himself and the Devil (God is the mother.)