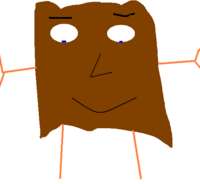 The only known photo of Buttered Toast Jones.

Born in 1996, Buttered Toast Jones grew up in the small neighborhood of Zetoun, a French town. He grew up in an orphanage because his parents, Fried Eggs Jones and Chocolate Pancakes Jones, abandoned him. Buttered was different from all the other kids because, well, he was a piece of toast. He couldn't go outside because of fear of being wet. He didn't like the name Buttered so he went by his middle name, Toast. He was lonely because no one wanted to talk to him and he was afraid someone would eat him. He spent his days sitting in a room, reading about America and swimming, since he'd never go swimming for threat of getting soggy. He was born with an allergy to wheat so no, he never ate bread.

One day when Toast was 12 he sneaked out of the orphanage. He walked and walked until he made it to Paris and then he stopped walking and spent the night under the Eiffel Tower.

Toast was awoken to the Paris police pulling him away from a bunch of homeless people. He was scared and kept shouting "What's wrong?!? What's wrong!?!?". He was pulled inside the police station. A cop sat down and said to him, "Who are you?". Everyone there spoke French, including Toast, but he preferred to speak English. However, he spoke in French to the cop: "Buttered Toast Jones, sir". "Buttered Toast?" "Yes, sir." "Hmmmmmm... Where are you from?" "Zetoun." "How old are you?" Since he was a piece of toast it was hard to tell his age. "Twenty-three." "OK, piece of toast, go on your way." Toast left the precinct and ran towards the airport; he had to get to America.

He ran to the Paris airport and he paid a man five-hundred dollars for a plane ticket to Boston. He ran up to the desk and said, "Hello my name is," he checked the ticket's name, "Peter Torres." The flight attendant said, "Oh, Mr. Torres, your gate is over here." She pointed to the left. Toast ran over to his gate in excitement. He sat down got a Pepsi and waited. He looked over and saw the gate was empty and the flight attendant was laughing. Toast wondered why and kept sitting there. For hours, no one else came. He looked over at his ticket, it said November 29, 2008, 4 months from then.

Toast figured he could leave the gate and get a later flight. He tried to walk out of the gate but he was stopped by a guard and he said, "Legally, you cannot leave. You are technically in America. Unless you show me your visa you cannot leave this gate". Toast was like, "Wait, wait, wait. Isn't this like a copy of that Tom Hanks movie, 'The Terminal'?". "Ya know what, it is. Sorry folks, we'll change the story". They waited a minute and then the guard said, "You may get another flight if you do me one favor." "I'll do anything!" "Let me have a bite."

"A bite of what?" "You know what." "A bite of me? I'm just... Toast." "Buttered Toast, mmm-hmmm!" "Okay, what part?" "A crumb from your stomach." "Only a crumb? Okay..." Toast scraped off a crumb from his stomach and the guard ate it so fast you wouldn't believe it. "Okay, Mr. Torres, there is a flight to New York City in Gate 2-D. It leaves in 20 minutes so run." Toast was upset because his parents were in Boston. "What about a ticket?" "Here, take this ticket." "Okay, thanks!" Toast ran as fast as his toast body could run. He got up to the desk when he heard the last boarding call. He handed the attendant the ticket and ran.

They were about to shut the door when he slipped into the plane and sat down in a seat. "Oh, this plane has television." He watched some French television and some American television and even some English television. It was a long ride so he slept most of it to avoid jet lag. He felt some turbulence when they were just off of the coast of New York. He awoke to screaming and crying. Everyone was jumping out of the plane and he was the only one left and there were no more parachutes. Toast jumped out of the plane without a parachute and fell...

Toast was flying through the air and then he realized something, he was a piece of toast. He softly hit the ground without a scratch on him. He looked up and... he was in America. The one and only U.S. of America. He walked around New York for hours seeing the sites and enjoying himself. He knew this was better than France. He went to the Empire State Building at looked out at the city from the top. "Wow," he thought, "Wow". He walked outside and noticed it was getting dark. He went to a local hotel and stayed the night.

Toast was awoken by the smell of smoke. He walked out of his room and noticed the hotel was on fire. "Oh my god! I'm gonna get over cooked!" Toast thought there was no escape and it was the end for him but by some luck, the fire in one of the windows burned out and Toast jumped through it. He landed on the ground and made sure he was okay. He was fine but he had to run away because he was afraid he'd be arrested for illegal immigration if he was questioned by the cops. He checked his watch and it was 6:00 in the morning. He saw a train station and went to it.

He went up to the person selling tickets and said, "Do these trains go to Boston". "You betcha, Toast." "How much does it cost?" "Ninety bucks a pop." "Okay". Toast went out out find a bank. He found a bank on the corner and traded his Euros for dollars. He went back to the train station and bought a ticket. He ran to catch the train and made it on in time. He went on the train and fell asleep.

He awoke to a horn and a man screaming, "Arriving in Boston". He got up and went outside of the station. He admired the city of Boston for about five minutes and then went to a coffee shop to get a phone book. He looked up his parents and went to their house. He stood on the street next to their house and ran up to their house but he slipped and fell into a puddle of water and slowly died due to sogginess.

For those without comedic tastes, the so-called experts at Wikipedia have an article about Toast, or simply go here.