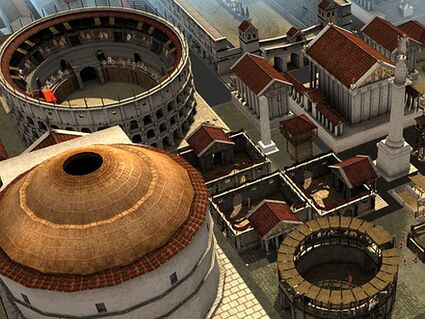 He served in the army under his father Vespasian, in Judea. When his father got a fortune cookie foretelling "something really big", Vespasian gathered much of his army to go to Rome to claim the throne during Rome's civil war. He left Titus to handle the Jewish revolt in progress, who took the job seriously, hardly sleeping and refusing full meals. Instead, Titus lived on coffee and doughnuts and soon developed a hatred for them. He went on to smash the revolt, which included the destruction of the Second Temple, mistaking it for a Tim Hortons.

His father Vespasian did become emperor. But after ten years, it turned out the prophecy of "something really big" was a really big case of diarrhea and he expired. Titus then became emperor and surprisingly, was not immediately assassinated by a bunch of Canadian Tim Hortons fans or anyone else.

For those without comedic tastes, the so-called experts at Wikipedia have an article about Titus, or simply go here.

He completed the Colosseum that his father started since he had already paid for season tickets. Instead of being blamed for being a jinx causing the Vesuvius eruption (79 CE) and the fire in Rome (80 CE), Titus is remembered for his relief efforts for the survivors. This was even though he had earlier destroyed all Tim Hortons in the empire so that there were no doughnuts or coffee to give them. He died after just two years as emperor, and was considered a good one for doing that.