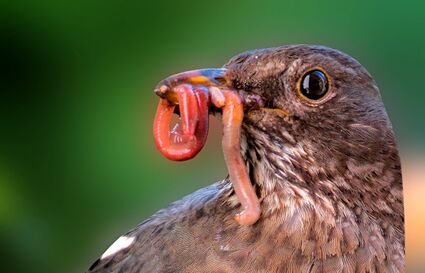 Titanoboa being preyed upon by the Humongo Bird.

Titanoboa is a giant snake that lived during the late Paleocene period. So, you can ask your grandma if she remembers any of these slithering around when she was a little girl.

Titanoboa is so named because a large snake appeared in director James Cameron's dreams, telling him to make the movie Titanic while spending titanic amounts of money. That indeed happened, with the movie also being of titanic length. That snake also took credit for sinking the original Titanic, but Cameron and everyone else already knew it was a big ice cube that did it.

Titanoboa is reported to have been over 40 feet (12 meters) long and weighed over a ton (either kind). Now, all they have found to date are vetebrae and ribs and zero skulls. So scientists have just scaled up parts of snakes of today to get an idea of the size. How do they know that titanoboa wasn't a fat stubby critter with no head? Further, titanoboa's measurements keep getting reported bigger and bigger at every retelling. Modern-day anacondas are already often found over 15 ft. (5 m.) long, with way bigger ones being reported but unproven since everyone was too afraid to go outside with a tape measure. Those anacondas can also weigh over 150 lb. (70 kg.). The late John Holmes might have been jealous of titanoboa but I would have to say it is far above most other men's pay grade, if you get my drift.

So, if a titanoboa comes knocking on your door this Halloween, you'll know its not real. It could be two or three anacondas, though.