Hitler Cat was rolling his tank through the forest, looking for me. I wondered if he had singled me out or if he had killed all the others first that were in line in front of me trying to kill Hitler when he was human. It really didn't matter, did it?

I dived into the brush and followed a game trail, circling behind the dictator. Then I ran as fast I could toward the time machine. As I arrived, Yvette the Groundhog jumped into the seat and sent us back about twenty years to think about what we needed to do. I explained to her about the shapeshifter cat and what he told me about not fixing everything like we thought we did.

Luckily, Yvette has a photographic-type memory and remembered all our most recent time jumps. So we backtracked step by step. Sure enough, back in the Cambrian period, I dropped a nickel from my pocket and left it back there. When we returned, I snatched it up and when we came back to the "current" time, Hitler Cat and his tank was gone. We met up with the shapeshifter and we got it confirmed. Everything was all cleaned up and tidy.

Okay then, LET'S DO THE TIME WARP, AGAIN!!! I got to talking to Yvette about fast food and KFC came up. She said it was all the same but I insisted it was better when it was Kentucky Fried Chicken. So, we were off to 1962 before the big selloff to corporate interests happened. Of course, Yvette wasn't going to eat any chicken, but she would notice the difference in their cole slaw. 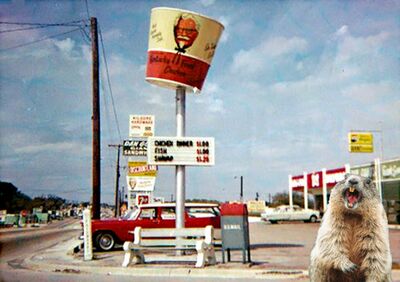 We ended up somewhere in Kentucky and sure enough, the cole slaw and everything else was a lot better than in our present day. Yvette got to wondering if it was a steady or abrupt change downward for the quality. So, we decided to jump to 1971 and someplace far away from the beginnings of KFC – Portland, Oregon. I walked a short distance from where the time machine was parked to put in our order. As I got to the door, some guy in dark glasses was coming out and caught my attention by trying hard not to catch my attention. He limped a little but sped up and jumped in a new car and sped off. I thought he vaguely looked like someone that I had seen before.

When I got inside, the employees and the manager were all talking animatedly. "Did you get a good look at him? I think that was him! And he paid with a twenty! We should call the cops." said one. The manager agreed and went to the back, holding the twenty dollar bill by the corner. Hmmm. It was only when I was leaving with the food that I happened to glance at the newspaper rack by the door, something I never see nowadays. And then everything clicked.

The headline read "HIJACKER STILL AT LARGE". There we were in the Portland area in very late November. This was about the guy called D.B. Cooper who hijacked a jet and parachuted from the plane with a ton of cash, all in twenties. I went to buy a paper and almost used the damn nickel again that was dated 2011. Luckily, I caught myself and used proper coins from the 1960s that I had brought along.

I took the paper back to the time machine and read the story out to Yvette. She said, "I suppose there is a mystery here that was never solved."

"Yup. The hijacker was never caught, and all the money was never found. Finding out who this Cooper guy was should be the perfect project. The game's afoot, Watson!" Yvette knew what I was talking about, since we watched a bunch of those old Basil Rathbone Sherlock Holmes movies together. With that, we headed home. But not before having some biscuits and cole slaw, which clearly could have been better.

But we had additional info that nobody else had. I had a rough idea of what he looked like. We knew he liked fried chicken, 'cause he had bought the full meal. And since we could go back in time, we could get an even better look at him than before. Like when he jumped out of the back of that 727 airliner.

After some quick research, we hopped in the time machine and went to the time and place in 1971 where we and others thought Cooper had jumped out of the plane, near the Washougal River, northeast of Portland. When we got there, as reports had it, it was night, it was really stormy and windy and we were both miserable. I really doubted if we could see or hear the 727 overhead.

"Look! Look there!", Yvette yelled. I could barely make out something falling fast. "That's not Cooper, but I'll bet that's the money," she added. So I started to run in that direction but Yvette was running for the time machine. Duh. It would take us right to the spot and right at the time it would be hitting the ground. I turned and followed and because of keen groundhog eyesight, she was able to get us really close to the landing spot.

We saw it falling near the edge of a burned-out clearing near the edge of the river. And then, we saw four people running toward the knapsack before it had taken one bounce. Woah! That Cooper guy had accomplices and the money landed right where they expected! Or so I thought until they started to fight each other. Then it dawned on me – these were other time travelers. And they outnumbered us, so all we could do was watch from the forest.

They were still wrestling and throwing punches as they got close to the water's edge and fell in. It didn't stop them fighting. The knapsack got flung out in the river somehow and got caught up in the current. The four mystery people got up and ran after the bag, yelling and screaming at each other all the time. I had had enough by this time and was depressed along with being soaked and freezing cold. I asked Yvette if she wanted to go home and she agreed, but not before jumping back to 1962 and Kentucky to get more KFC.

After supper in the forest back home, Yvette said she figured the beat-up packet of cash that some kid had found in 1980 had gotten loose during that struggle. But she also wondered: where was the rest of the money and where was Cooper? There were plenty of suspects over the years, after all. None matched who I saw leaving KFC, but maybe that was one of other time travelers.

We split up, each going to our separate houses. When I got home there was a white envelope on the dining room table. I opened it up and there was a brand new $20 bill in it. It was one with a 1969 date, just like the ransom money had. That was it, no note. This was too creepy. I stayed up all night wondering about this and finally decided I needed to talk to the shapeshifter cat to see if he knew anything about this.