About the third time machine excursion after what turned out to be our last jaunt, Arnold the Iguana got a sneaking suspicion that something was wrong. So, he traveled back a ways and found out that he started out being Yvette the Groundhog. Then he went to the hole in the ground where I was hibernating, and convinced me that I was once a human (ha!) and that we needed to jump back in her time machine to set everything right. It took a long time, but Arnold/Yvette got me back onto the time machine and here we are, back to normal. I think.

Sometime later, that got me to thinking about how the time machine ended up in the woods where Yvette found it. Why was it there and who left it there? Well, we could find out. So I went to Yvette's den and now found it to be done up like a Hobbit house with a round door and everything. So she must have rented the Lord of the Rings movies after I gave her my spare portable DVD player and rechargeable batteries. I knocked and she was home. I explained my plan and Yvette was raring to go, grabbing some carrots for a snack on the way out.

It didn't take long (relatively) before we found the exact time when the time machine first appeared. A man in a tweed suit jumped off and headed into town. I waited until I thought I couldn't be seen and tried to follow. No luck. So, Yvette took us to the time when the guy might arrive on Main Street. Luckily, there was a rhodedendron bush in the town square where we could be hidden and still get a view of everything. We saw the man go into the diner and waited. And waited. I got impatient and went in to find him, but he wasn't anywhere inside. We then went back in time to stake out the kitchen door but nobody came out but the employees at closing time.

So, we went back to the time where we started. Sitting in the woods, we tried to figure out what happened. I looked up and a gray tabby was walking toward us. Yvette made herself scarce but the cat didn't give chase. Instead, it came right up to me and asked, "Were you looking for me?"

The cat explained it was actually a shapeshifter who moved to this place and time. It was given the task of delivering the time machine in exchange for a free trip here. But who ordered the time machine?

"It was the man who lives in the trees in the woods." Huh? "I haven't seen that one for a couple years now. I suppose that the machine does indeed belong to your groundhog friend now."

By now, I was totally confused.

But the cat continued. "That's not your main problem right now. When you guys messed up this timeline, there were other repercussions. And you didn't fix everything. Remember the time you tried to kill Hitler? Well, he's coming to take you out in revenge. Some things are now different, but Hitler hasn't changed."

Just then as it was getting dark, we saw and heard a tank in the distance headed toward the woods. 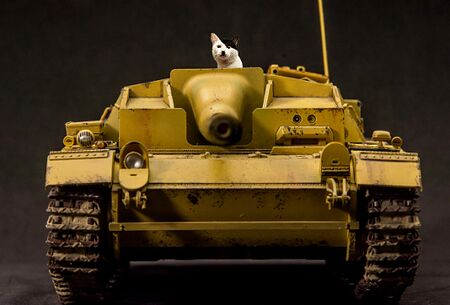