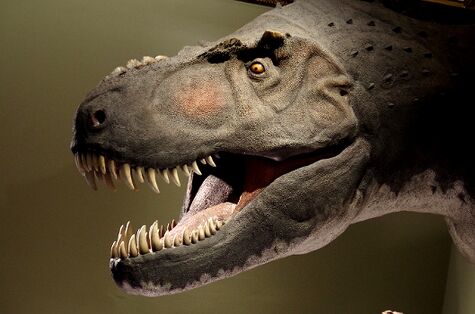 Yep, one of those guys.

So the groundhog that owns the time machine, Yvette as she calls herself now, was over and we were watching The Simpsons. Naturally, it was the one with Homer going back in time because of a faulty toaster.

We both wondered if we could somehow make it rain doughnuts in our time, so we decided to do what Homer did, using the time machine instead. I'll have to admit at the time we were laughing so hard we weren't thinking too clearly. In any case, we were off the next day into the time of the dinosaurs.

I even brought my toaster along, just in case. We were going to draw straws to see which one of us was going to sneeze in the face of a T. rex, but it came down to me because I was just more Homer-like. But I would stand on top of the time machine and Yvette would get us out of there when the monster got too close. Well, that worked out and we zipped back to that time to find that, sure enough, a whole other bunch of dinosaurs had keeled over. Take that, Jurassic Park!

So we went "back" to the Thursday after we left when rain was predicted. And we waited. The clouds rolled in and... it was just normal rain. We were both kind of crushed but still thinking but still not thinking too clearly. We then decided we had to do everything in the sequence that was shown in the cartoon: squashing a flying bug (twice), stepping on a fish walking out of the water, the whole nine yards. This meant going to way different time periods but we managed to do it and get all the tasks done.

So we went "back" to that Thursday "again". There was a little thunder and lightning and suddenly, it started to rain. Not water rain, not doughnuts, but Little Debbie Snack Cakes, all individually wrapped. There were chocolate ones but we were kind of bummed we weren't getting fresh doughnuts with SPRINKLES for free. Still, me and Arnold the lizard got a bunch and he went back to his floating castle in the sky and I slithered back to my den in the cactus patch not far away.