I was loading the breakfast dishes into the dishwasher when I heard the familiar knock at the French doors that led to the backyard.

Sure enough, it was my groundhog friend from the woods out back. I gave her two carrots which she wolfed down immediately. Then she said, "Thanks for the carrots! I was starvin', Marvin!"

I was in shock. I just stood there like an idiot and the tubby rodent spoke again. "Surprised I speak English, Yankee dog? You know that your neighbor runs his TV pretty loud and I just picked it up from there over the years. The groundhog continued, "So, in gratitude for your handouts, do you wanna see something real interesting hidden in the woods? It won't bite and I think you'll really like it. But you can't tell anyone else about it, okay?"

I mumbled my agreement and got my shoes and coat. The groundhog led the way into a part of the woods where I had never been. There was a large thing there covered with a tarp. Whatever was underneath had runners like a sled.

"You can pull off the tarp for a look. I usually just crawl underneath," said the groundhog.

And there was a beautiful reproduction of the time machine from the 1960 movie! Real cyberpunk stuff.

The groundhog said, "It works, too."

"So the back wheel spins and console lights flash? That's really cool!' I said.

"No, it really works as a time machine" Whoa. Am I supposed to believe a talking groundhog?

So the little groundhog went on to explain that it was wandering in the woods and stumbled across this machine. Her guess was it was either left here by the user or some local was a mad scientist in their spare time and built it. When she first found the time machine, she climbed up on the seat and accidentally hit the controls and sent herself in to the past. The groundhog ended up in the time of the dinosaurs before she got the thing stopped. She then was eventually able to figure out how to get back here. She added that it could probably go anywhere on Earth.

"So if you ever want to go for a time trip sometime, let me know. But only if you can keep this a secret."

So the groundhog led me back home and now it was my turn to thank the groundhog for the look. I also promised to keep the secret and said that we would talk the next time I saw her.

So I decided on a plan: I was going to kill Hitler. I bought vintage clothes, and photoshopped a passport and money from that era. I made maps, had a photo of a good landing spot, everything I could think of, even a snack for the groundhog. I cleaned and loaded my pistol and I was ready. I was told by the groundhog that the time machine's battery was low so I pulled out my car's battery and took it along into the woods, following the groundhog.

We were in Germany in 1932 in no time at all. For us, anyway. We were quite close to Hitler's retreat, The Berghof in the Bavarian Alps. The groundhog would move the time machine to another location if seen, but we would meet back in the same landing spot no matter what. To my surprise, as I took a mountain path leading to the buildings, I saw a long line of people leading up to the gatehouse. 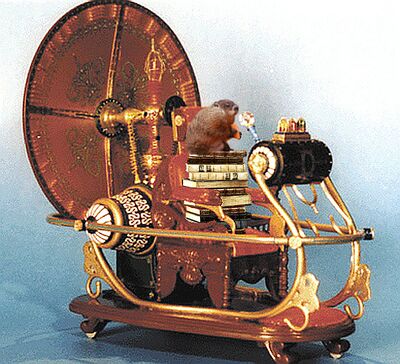 The last guy in line turned and looked at me and snorted, "Nice clothes, but you got the collar wrong. You'll have to wait your turn. There's about fifty guys ahead of us waiting to kill Hitler, too. I assume that's why you're here."

Well, in spite of all my planning and if history said that those guys never killed Hitler, I wasn't going to be able to do it, either. So I got back to the time machine and asked the groundhog to take us to Hitler's mother's house, in 1888 before Hitler would be born. I knew the town name and thought we could land some distance away and I would walk over and shoot Hitler's mother. And off we went.

I should have guessed, but just as I reached the town limits, I saw a sniper hidden in some trees, then one in a window. The entire Hitler household was ringed with snipers. I turned around and went back to the time machine and had the groundhog try the grandmother's home in an earlier time, but it was the same deal there. So we just went home. The groundhog tried to console me by offering some German parsnips she had found, but I was truly disappointed and tired. It did cheer me up when the groundhog said I had an open invitation to go time travelling with her.

So me and the groundhog have been watching a bunch of time travel movies and whatnot to prepare for the next trip. We both liked the one with Homer Simpson getting his hand stuck in the toaster.