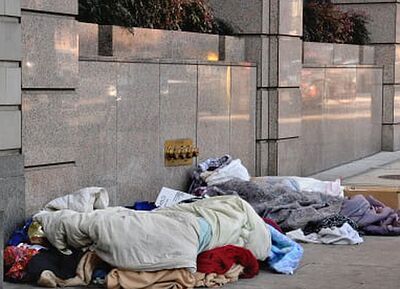 Thunderbird fans line up early for tickets to WINO CON.

Thunderbird is a fortified wine sold by The Man to the homeless and poor to keep all the good stuff for himself. Because nowadays, 3-Buck Chuck is cheaper.

Its bottle is a product of careful, purposeful design. It is made so as to be heavy opposite the label side, providing advertising when bottles are thrown in the street. Maker Gallo actually once had people throwing empty bottles in the street in the inner cities to "create brand awareness" but found that bums were following them back to the factory to lick the floors. The bottle is also sized to both fit in the traditional paper bag and fit in the hand, so the aficianado can comfortably enjoy his or her wine lying in an alley or against a building.

Some kind of citrus is adding for flavoring, usually dregs from the overflow tanks from 7-11 Slurpee machines. It hardly matters, since Thunderbird tastes like methanol, the stuff that's pretty poisonous but still a big favorite. Thunderbird's syrupy sludgy goodness allow for a good amount of choking and gagging for the noob on the street but is otherwise beloved as it is so reminiscent of Sterno.

Thunderbird drinkers are given so much respect that if they die with a bottle of it in their hand, street people and out-of-work cast members of Les Misérables will observe a full minute of silence before trying to grab it.