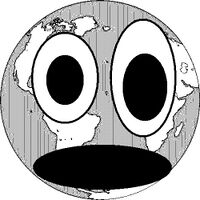 The world was discovered on an exhibition to the Milky Way on October 15th 1975 by a Dutch dermatologist named Gareth. Since its discovery the world has been verbally attacked by mainly; various celebrities; lawyers; scientologists, well renowned doctors and alternative rock bands.

The world's biggest critics include the likes of infamous dictators like that one you cant remember the name of, a middle class white man from somewhere in Surrey, England, and REM. If you believe they put a man on the moon.