The hamster that lives down the street 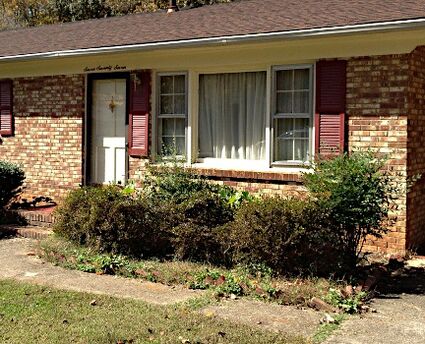 Living in the suburbs, things are usually quiet and even boring most of the time.

I pulled the car out of the driveway and went to work one day and noticed something new in the front window of the brick house down the street. I didn't quite catch what it was and just continued on my way. It was still sunny when I was coming home and thought to look over at the window again. To my surprise, it was a hamster running in its wheel that was put in the window. Was it was there all day? That would be impossible, I figured. It would get too hot or too cold, but then the hamster would probably get off the wheel when it got uncomfortable.

The next day, I had to leave early. I glanced over at the brick house and, what do you know, there was the hamster running on the wheel. I also got back home late and when I passed that house again, there was the hamster, spinning that wheel. That little guy (girl?) must have some kind of stamina. Then I realized it was just coincidence and I probably just saw it during the times it happened to be running.

It wasn't the first weekend but the second after I first saw the hamster that I ran into Mrs. Phelps from across the street. We found ourselves talking about the hamster. According to her, she had never seen the hamster not running in its wheel since it first appeared. Really? I asked her if she knew the people that lived there, but she didn't. Some Karen walking by butted in and said the hamster was owned by a pedophile trying to lure little kids into the house. I asked her if she knew that for sure, but she just threw some shade and walked off. Mrs. Phelps went off to run errands, but I headed down the street. Sure enough, the hamster was running on the wheel. I checked back five times at different hours, even at night, and each time, there was the hamster running in its wheel. Hm.

It was now late Summer and we got a whale of thunderstorm that knocked out all the power one night. Apparently the cellphone towers were knocked out, too. Afraid to use up the battery on my phone by using it as a light, I did drag out an old flashlight which did have working batteries. I went down the street to get a better view of the neighborhood to see how much of the area lost power. As I passed by the brick house, I noticed the wheel was there but the hamster was not. Maybe it was scared by all the lightning and thunder. I walked several blocks but it was dark as far as I could see. Well, the power company would soon have its trucks out, so I just went back home and went to bed.

When I woke, the power still wasn't on. It must have been really bad. Still no phone service. I hoped maybe someplace was open so I could get a hot breakfast. But when I went to start up my car, it was dead, too. There was a knock on the door and it was Mrs. Phelps, saying everything including cars were dead for everyone in the neighborhood. Luckily, she said when she checked up on her friends on the next block, they invited her back to bring some things for breakfast that they could cook on the barbecue grill. So, she invited me and told me to bring something. Carrying half a package of bacon and a dozen eggs, I set out with Mrs. Phelps. Naturally, we passed by the brick house with the hamster. But it wasn't in its wheel.

We were the guests of the Patricks. Four others were already there starting to cook. A metal coffeepot was sitting on the grill, too. Great! There was enough for all. Mr. Patrick invited us all back for a pot luck lunch but explained that his propane tank was getting low and the meal would be cold sandwiches plus anything we might bring along. But he did add that there probably was enough propane for cooking dinner and we were all invited back for that, too.

We returned, with Mrs. Phelps bringing a large bowl of macaroni salad. Again, a good time was had by all present, but we did notice some of the other neighbors were milling around aimlessly outside. There were no party crashers, thank goodness. No zombie apocalypse, either. Once again the dinner invitation was made and we all headed home to rest up and raid our fridges for dinner contributions.

Once again, I went along with Mrs. Phelps to the Patrick's. We all wondered why there were no people from the power company anywhere around. And that hardly explained all the dead cars and phones. Nonetheless, we had a respectable dinner. The Patricks hoped that they could get more propane somehow. But another neighbor said that with the power out, the stores were all shut tight and had no power to run their registers. Okay, back to cold sandwiches until the power came back on.

I walked back home with Mrs. Phelps after dark. And it was truly dark out with a new Moon, but the flashlight was still holding up. We could see all the stars for a welcome change. Then, just as we passed the brick house, we both saw small hands like a kid's placing the hamster in the wheel. We watched with amusement as the little hamster slowly got up to speed.

Suddenly, the street lights flickered and lit up. House lights came back on. Some car horns started going off. Mrs. Phelps pulled out her phone and it was working again.