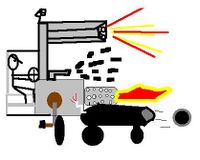 The Ultimate Destructo Death Machine: It's better than the ultimate shotgun!

The Ultimate Destructo Death Machine, hereafter refered to as TUUDM, has a top speed of 400000 Americans. This is actually quite slow, so it was recently upgraded to 400000 Kenyans, which is approximately 4.312358420934 times the speed of light.

The TUUDM has a large away of weapons, including the Surprise Buttrape Cannon, the Red And Yellow Repetitive Party String Machine Gun, the Cack Spray Pistol, the Big Front Spike That Looks Like A Boat On Fire, and the Man In The Back Seat.

it also has a built in awesomness meter, but it broke because the TUUDM was too awesomez.

The TUUDM is widely considerd by many experts to be the best thing in the world, beating everything else, exept for a few things.