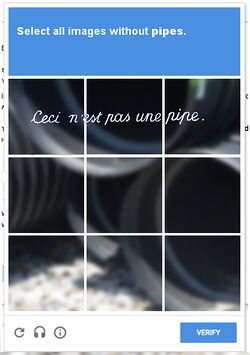 The Treachery of Images is a 2005 work by multimedia artist David Hockney. It is based on an earlier work by René Magritte using the same name. The original has appeared several times in gallery exhibitions, while the image itself is well known on the internet.

Follow the White Rabbit
Will the universe be changed one bit if you do? Probably not. The dark hearts of coati mundis? Maybe. But your reflection in the mirror? Oh, yes.
Retrieved from "https://wackypedia.risteq.net/w/index.php?title=The_Treachery_of_Images_(2005)&oldid=120366"
Categories: