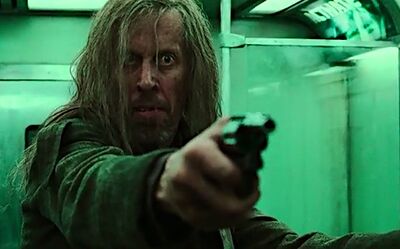 ~ The Trainman, referring to his teeth

The Trainmen is another program taking up RAM in The Matrix and sharing the same first name as just about anyone else there.

He has scruffy hair and bad teeth, allowing him to pass for your bog standard Northerner or American techie tourist. His name is apt since he is dressed like a typical trainspotter. Luckily for all, there is no smell in The Matrix. He is the creator of the Mobil Avenue tube station, as 'Shining Time Station' was already taken. Matrix copyright rules, you know. That allows him a measure of control to mess about, where he is normally beholden to The Merovingian.

And mess he does, standing in the train doors when the train is in the station, smuggling goods and people in and out of The Matrix, and making garbled train announcements over the PA system. He refuses to mind the gap and often falls through and gets run down by trains. In other words, the usual thing that happens at tube stations.

Neo was once trapped at Mobil Avenue by having his funds erased on his Oyster card. Londoners take note. Every time Neo tried to board a train, The Trainman attacked him. Even later when The Morpheus, The Seraph and The Trinity were attempting a rescue, The Trainman pulled out a pistol and began shooting an infinity of bullets at them. Surely, this was grounds for an ASBO. And so guns work how and when and where again in The Matrix/not the Matrix? Tsk, tsk, Mr. The Trainman.