Something that was definitely not written by Richard Lee Byers and which relates only peripherally to any of The Rage, The Rite, and The Ruin 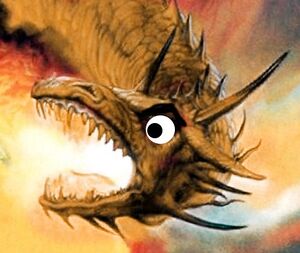 After crashing down on the back of the enormous draconic lich, Dorn slashed deep in its rotting hide with his hand and a half sword. Laying into it with each step he took along its broad but slippery back, he dug out one of its vertebrae entirely. Lashing a leather strap through the dead spine bone he had torn loose, Dorn proceeded to lay about him like a man gone mad, smashing dragons on all sides with the enormous bone flail.

Meanwhile, the dracolich, deprived of part of its spine, lost structural integrity. While the fore part twisted around in the air and continued to slash at Dorn, the afterdeck tore free and plummeted to the Earth far below.

Dorn was horrified to see that Kara, still unconscious and bleeding after their run in with the Chainsaw Dragons which served their master Dracolich with such horrible efficiency, lay directly in the path of the plummeting dragon end.

Pavel, observing the difficulty in which their beloved Song Dragon found herself, held Lathander's symbol high and spoke words of power. The light blinded nearly everyone in the area, and the nether parts of the dissected dracolich were reduced to nanoparticles.

Unfortunately for Taegen, who had just finished passing his magical sharpening stone over his long thin elven blade, and who was flying near in an effort to rescue his friend and compatriot, the fine asbestos dust which was all that remained of half of the lich lay directly in his path. He dodged but not sufficiently fast. His lungs, which had as yet not fully recovered from their last three encounters with the deadly Clorox Dragons of the inner swamp, threatened to collapse completely under this new coughing fit, and he feared he would not be able to stay in the air if it did not subside. Indeed he would soon find himself flailing downward through the air, to land in a broken heap, just like any ordinary non-winged elf, if no one came to his aid.

Jivex, clinging to Taegen's back (where he was safely out of harm's way), cast one of his few non-illusion spells, and Taegen's lungs everted, shooting from his mouth like twin jet exhausts. "You humans (and elves) -- you can't stand anything. You'd be lost if it weren't for me. It's just a little asbestos dust," he said, as he licked Taegen's lungs clean. Taegen endeavered to protest the attention, but with his lungs inside out and hanging from his bronchial tubes, which were projecting from his gaping mouth, he achieved little more than an incoherent grunting sound.

From far below, he heard the indescribably sweet voice of the company's bardic dragon, intoning the immortal words of Warren Zevon,

"You'd better stay away from him -- he'll rip your lungs out, Jim!"

Dorn found himself back on the ground. He was once again wandering in the slough of despair, as he had yet again failed to protect his fragile beloved Song Dragon from the vicissitudes of the war. As he looked around for a tree from which to hang himself, the Earth shuddered under an intolerable impact, as a massive Ecru Dragon crashed to ground directly in front of him.

The beast's maw gaped open in the middle of its mask, and Dorn knew its dreadful breath weapon was about to be unleashed on the party. In moments, they would all be drenched in urushiol, and without immediate treatment with an antitoxin, they'd all scratch themselves to death from the horrible itching it would cause. Without a second's hesitation, Dorn, who was too depressed to care what happened to him, charged directly down the throat of the oncoming horror.

Once in its gullet, Dorn found there was insufficient room to properly swing his hand-and-a-half sword, so he resorted to punching holes in the lining of the crawling horror's stomach lining with his nearly impervious neodymium bronze and steel plated fist. In its frantic effort to relieve itself of this internal offence, the dragon twisted itself into a figure eight knot, and finished by swallowing its own head.