The Psychedelic Magician takes a holiday 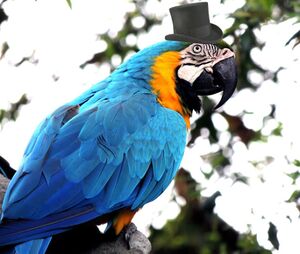 The Psychedelic Magician opened the door to his wagon. It was now standing in the jungles of the Yucatan peninsula. The colorful macaw was back where he had grown up.

He hopped up on the roof and walked around in the early morning sun. Meanwhile his rabbit assistant Kukol stood out on the front stoop and sounded a trumpet call, announcing their presence to everyone in the area.

Not long after, a delegation from a local village appeared. The Psychedelic Magician ushered them inside the wagon.

"Señor Brujo, our poor village is under attack. The government will not help us here out in the jungle. They are afraid to come," said the one who appeared to be their leader. "It happened when we were making cheese in our small factory. Another brujo came in and complained that the cheese had made him sick. With a wave of his hand, he cursed our cheese, which became runny and tasteless. Yes, it turned into Velveeta! And then it formed into one giant blob and crawled off into the jungle. Since then, it has come back and raided our village for tortillas almost every night."

The Psychedelic Magician noted, "Well, if this was caused by magic, then this has to be taken care of in person. Kukol, bring your top hat and the magic cards." And the two headed into the jungle.

The magical macaw flew to the top of small hill with the rabbit climbing after him. While Kukol caught his breath at the top, the Psychedelic Magician spoke.

"This is not a natural hill we are on but an overgrown Mayan pyramid. It is made out of limestone blocks, the predominant rock in this region. See the uneven land with fissures and caves all around us? That is due to limestone eroded by water. This type of terrain is called karst. We will use it to our advantage. Ready?"

The rabbit jumped into his hat, handing the deck of cards to the parrot. It did not take long before they saw movement below. The orange blob was easily seen against the green of the foliage. The Psychedelic Magician yelled out, "We've got chips here! Come and get it!" The cheese monster turned and headed toward where the two were and began climbing the pyramid.

Kukol was getting worried as the magician did nothing while the monster got to more than halfway up the pyramid. The unruffled macaw finally shuffled up the deck in the air and selected a card. It flew over toward the rabbit as usual and he was completely dumbfounded by what it said.

"Kukol, read it out loud quickly! No matter what it reads, say the words! Now!, before the cheese gets us!," exhorted the Psychedelic Magician.

The rabbit took a deep breath and intoned loudly, "Karst longa, Velveeta brevis!" The startled cheese monster lost its grip on the pyramid and fell, disappearing into a deep chasm. It was all over; the threat was gone.

Kukol glared at the macaw and said, "That wasn't Latin! And it was a horrible pun, besides. WTF???"

"It was a surprise to me, too. But it did distract the cheese monster, did it not? Que sera, sera," replied the magician.

"That's not Latin, either," grumped Kukol.

Pick a card, any card[edit]