The Psychedelic Magician and his extradimensional visitor 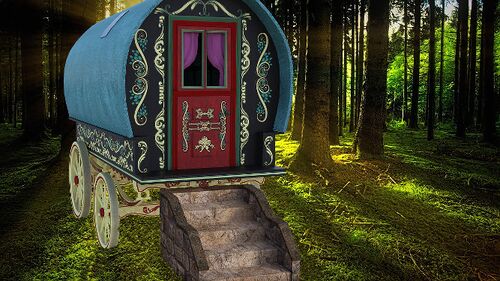 The Psychedelic Magician was working out another magical illusion when there was a knock on the door of his wagon. The Magician had taken that name because of his brightly colored plumage, being a parrot after all, plus his admitted drug use in his misspent youth. He called out, "Come in!".

Before him stood a humanoid creature, mostly bright green. The Magician at first assumed this was a flashback but then soon realized this was a real... thing. This creature began babbling in a strange tongue that The Magician soon realized was something like baby talk. He hopped over to a shelf and took a Babel fish out of its little fishbowl and put it in his earhole. Much better!

"... so he took my hat AGAIN!! I want this to stop. And right now!!", said the angry creature, now translated.

The Magician said, "You do realize that whatever happens, it will probably be non-reversible? Consider carefully, now."

"Impetuous are you not? Well, then, go over to my desk. See the pack of cards? Pick any card and take it over to my top hat over there. You will find every card is blank and they can only be interpreted by one person. Go on," instructed The Magician.

The creature waddled over to the desk, took a card and brought it to the top hat. A rabbit popped out, bowed deeply and took the card. The green creature giggled and squealed at this, suddenly quite happy. The rabbit closed its eyes and held the card to its forehead. It solemnly said, "Natura abhorret a vacuo".

The parrot then said, "Nature abhors a vacuum, eh? I don't know what that's supposed to mean here, but you can return to your land and find your problem is solved. The creature danced and giggled, then bowed deeply in thanks and left.

So, the bright green creature known as Dipsy returned to Teletubbyland. Opening the door to the house, he found Noo-Noo inert and turned into a hat rack with his hat on it. Dipsy shuffled off to tell the others about his visit to the Psychedelic Magician.