The Psychedelic Magician and His Benevolent Army of Latin Terminologies 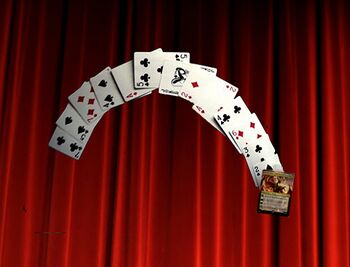 Even magical self-shuffling cards are showoffs.

Mike was completely out of breath and nearly ready to give himself up to the zombie army after him. Just then, he saw an old-time wagon in the middle of an empty lot, garishly decorated in swirling patterns. Within scrollwork on the side was written The Psychedelic Magician and His Benevolent Army of Latin Terminologies. Despite his desperation, he decided to knock on the door instead of trying to kick it in. The door opened with a creak and he went in.

The wagon seemed to be much larger on the inside. He closed the door behind him and took a step forward. From behind came a crackly voice. "What can I help you with today?"

"Please, sir! We have to get out of here! Zombies will be here any minute!," said Mike, turning but seeing only darkness.

"Fear not, young sir. The Psychedelic Magician stands ready to help. Let me consult the cards." Cards larger than standard playing cards materialized and began shuffling themselves in the air. Mike's eyes had finally adjusted to the room light and saw that the voice of the magician was coming from a parrot! And it was a macaw, whose colors certainly fit the psychedelic description.

The parrot continued, "Now mentally pick a card and it will leave the pack and fly to the top hat on the table. Touch not the card!" Mike did as he was told and the chosen card sailed to the upturned top hat. A rabbit popped out of the hat and deftly caught the card.

The rabbit held the card to his forehead. It squinted and intoned, "deus ex machina."

The parrot cackled and said, "Well done! What's done is done. Take a look outside the door."

Reluctantly, Mike took a peek then flung the door open. The wagon was on the deck of a ship at sea.

"Ohhhhh. So that's what that phrase means," said Mike.

Before your very eyes is...[edit]

Follow the White Rabbit
Will the universe be changed one bit if you do? Probably not. The dark hearts of coatimundis? Maybe. But your reflection in the mirror? Oh, yes.
Retrieved from "https://wackypedia.risteq.net/w/index.php?title=The_Psychedelic_Magician_and_His_Benevolent_Army_of_Latin_Terminologies&oldid=126582"
Categories: