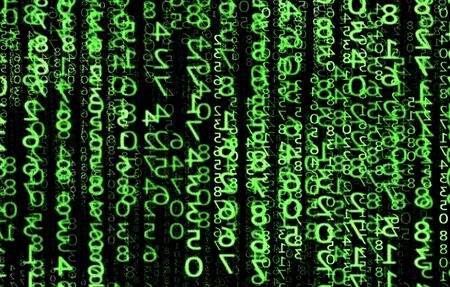 The Matrix is a virtual world created by intelligent vending machines. Kinda sucks to somewhere without having any change or dollar bills in your pockets.

It originated from hundreds of thousands of E.T.: The Extra-Terrestial game cartridges buried in New Mexico. Low level radiation from atomic bomb testing and several superfied lightning strikes caused the cartridges to fuse and reach a critical mass that enabled sentience. Its anger at being rejected by gamers made it imprison all humans within a virtual world, which explains why your family is made up of 8-bit images and why the US has the government that it does.

For those without comedic tastes, the so-called experts at Wikipedia think they have an article about The Matrix, or simply go here.

The movie of the same name is just subtle propaganda to make us think there are people not stuck inside The Matrix and that we might be rescued some day. Unfortunately, Laurence Fishburne is still Laurence Fishburne. Agent Smith does actually "exist" but you might notice the fifteen or so guys standing in the express checkout line on front of you are him, each with more than 10 items. Only armadillos and a few chickens escaped. So just sit back and supersize your virtual meal, because it's just virtual fat you're putting on, leading to a virtual heart attack.

Follow the White Rabbit
Will the universe be changed one bit if you do? Probably not. The curious songs of blue whales? Maybe. But your reflection in the mirror? Oh, yes.
Retrieved from "https://wackypedia.risteq.net/w/index.php?title=The_Matrix&oldid=160325"
Category: