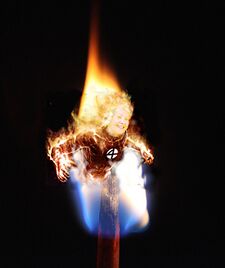 Whoa, Grandma! You may be in hell, but you're in the Fantastic Four. Cool!

It was a dark and stormy night. The Little Match Girl was barefoot, her feet turning blue and red from the cold as the cold rain turned into freezing rain. She had taken off her Nikes for just a moment when a bigger boy came along and stole them, saying that little girls shouldn't play with gunboats, whatever that meant.

She walked from crack house to gay bar to whorehouse trying to sell her boxes of matches, but all the hipsters were vaping these days and had no need for them. She had sold no matches during the day, either, and her father would beat her surely for being a Fail Whale, even though she wasn't named Shirley. She was a miserable sight, so pitiful that Pedo Bear took one look at her and passed her by! She smelled the warm, rich aroma of McDonald's and was reminded it was New Year's Eve. Yes, she thought of that!

She sat down on a stoop in a back alley. Her hands were almost dead with cold. Oh, how much one little match might warm her! She lit one and held her little hands over the small flame while holding the match in her third hand. The flame grew and she felt that she was before the great iron stove in the jail when she was sent to bail out her father. But the match burned out and she was growing cold again.

She lit another match and its light fell on the wall nearby. There she saw a table bolted to the floor with a Big Mac meal on a silver tray on it. And it was supersized! And there was the most glorious plastic Christmas tree she had ever beheld! The old McDonald's jingle ran through her mind and she started to sing along, but that match burned out and the scene disappeared.

So she struck another match and in the flame, saw her dear departed Grandmother. "Grandma!" cried the child. "Oh, take me with you! I know you will disappear when the match is burned out." Then she lit the whole box to continue the vision of her Grandma burning in hell because she was a Quaker.

As the sun rose, a policeman found the sad frozen body of the little girl with an odd smile on her face, blackened by the smoke from the matches. "Sarge, I got a frozen match girl here. What should I do?" The sergeant replied, "You stupid rookie! Put her in the trunk of your squad car and just put her in the pile with the rest of the frozen match girls, okay? Didn't they teach you anything at the academy?"

Based on an original story by Hans Christian Andersen. Hans, you are one sick fuck, you know?

v • d • e
It was a dark and stormy night
Retrieved from "https://wackypedia.risteq.net/w/index.php?title=The_Little_Match_Girl&oldid=165405"
Categories: