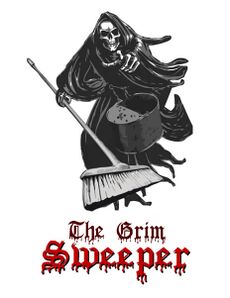 The Grim Sweeper is a supernatural being that acts in much the same way as his brother, the Grim Reaper. However, being a second child, Sweeper was not given the same attention as his more well known sibling. As a result, he was rubbish at most things and left school before completing his GCSEs.

In his teenage years, Sweeper went through a string of low-paid jobs but was unable to hold one down for more than two days. Reasons for his sacking, given by former employers, included "he keeps slicing the customers in half with a broom", "he killed the manager" and "he needs to use some extra-strong deodorant".

These days, Sweeper can be found cleaning toilets, picking litter and generally cleaning stuff up on behalf of the Council of DeathTM. Most of the time he is inconspicuous as the last time anybody came within five metres of him the smell killed them instantly.

Often jobless, The Grim Sweeper has to hire himself out for Weddings, Bar Mitzvahs and children's birthday parties in order to make ends meet. His Bill Clinton impression is reportedly "uncanny" and he has appeared on more than one occasion at the White House Halloween stand-up comedy bash. Supposedly, he is Dick Cheney's favourite stand-up comedian and very popular with the "guys from the West Wing".