The Great Asparagus Experiment of 1911 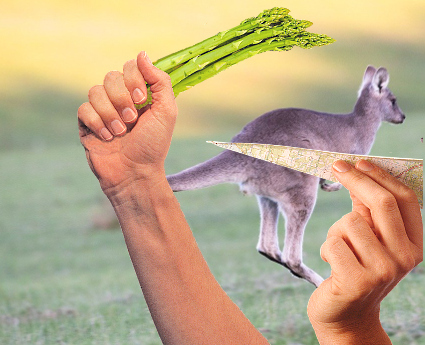 While it is important to check wind direction while using your asparagus boomerang, there is no sense in faffing around and letting your prey escape.

It was an unusually rainy winter in Australia in 1911, with some areas getting up to 2 inches (5 cm) of rainfall during the season. Because of this, the aboriginal people could not hunt for food since the local wood was too wet to use for proper boomerangs.

However, due to this excess amount of rain, asparagus that had been unsuccessfully planted years before actually sprouted and matured. Australian farmers had their first crop of asparagus, and it was a bumper one, too much to be consumed by the population at the time. It was then that scientist and barfly Bruce Wormley-Scrubberpad stepped into the breach. His idea was to use the excess asparagus as boomerangs, thereby solving two problems at one stroke.

The problem was that raw asparagus, as everyone knows, is very hard to throw accurately. Wormley-Scrubberpad experimented day and night for months until he found the right combination of trimming and blanching to get asparagus to fly and return just like a boomerang. There was still the problem of being able to kill animals when they were hit instead of missed by thrown asparagus. This turned out not to be a problem since targets were often so surprised at being hit by asparagus that they would die of shock.

The scientist presented his findings to the Australian Agricultural Ministry who then presented them to Parliament for approval of asparagus as a food and weapon. It was approved in record time, 14 months. Unfortunately, tens of thousands of native Australians had perished by that time, largely due to a lack of vitamin B6, calcium, magnesium and zinc, exactly the nutrients found in the asparagus set aside for experimentation. Hrm.

Today, asparagus boomerangs are used in the extreme sport of bogan hunting.