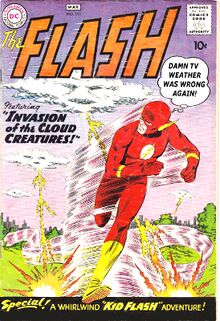 The last known photograph of The Flash no. 111.

However, archaelogists and historians keep finding evidence of the comic book appearing in the historical record. The earliest known proof is an identifiable fragment of a page caught in the tooth of a Tyrannosaurus rex. Records show that a copy of The Flash no. 111 was used by ancient Egyptian priests to resurrect a lion, which was successful since it then ate them all. A copy was listed in the surviving part of the card catalog of the Library of Alexandria with a note indicating it was checked out but never returned. It is known that a pair of "Magic X-Ray Glasses" was used by William the Conqueror at the Battle of Hastings, and was ordered using a coupon clipped from the comic book.

It is said that Alexander Dumas père copied out The Count of Monte Cristo from a story in The Flash no. 111. A copy can be clearly seen in a photograph of Alexander Graham Bell's workbench. Another photo shows a rolled-up copy under the arm of Stalin. The comic book has also been found in many outhouses and bathrooms throughout all of history.

It is unknown if this is just one comic book or many. Any copies found and placed in museums have mysteriously disappeared, so some think there is only one copy that somehow travels in time. Others contend that if there were only the one, it would be one extremely tattered copy by this time. They point out that any examples found were graded VF by experts and therefore were not missing the aforementioned coupon.

Examples found always have small differences. The basic cover artwork is always the same, but details always differ. The interior pages are always tremendously different. The Voynich Manuscript, the Necronomicon and the equally mysterious Book of Soyga are actually photographed sections of found copies of The Flash no. 111. Further, museums have reported the comic book changing while in their possession. Therefore, some people contend that the book is demonic or magical. However, if this was the case, author J.K. Rowling would have stolen the idea for her Harry Potter books.